The big president of the big jury this year is witty, clever and kind English gentleman, Mr. Adrian Holmes, Executive Creative Director of Young & Rubicam EMEA. We managed to get his answers to the questions we are all interested in and the taste of his presentation which will be held on October 8.

AN INTERVIEW WITH ADRIAN HOLMES,
PRESIDENT OF FILM, PRESS, OUTDOOR AND RADIO JURY

How will you judge the works? What are you looking for in it? What are your criteria for a good campaign? How would you define a bad campaign?
I’ll strongly recommend to the jury that they assess entries according to four criteria:
· Firstly, is what they’re looking at an IDEA with real intelligence behind it, and not just a fancy technique, or ‘eye-candy’, as they call it in America?
· Secondly, is this idea something that we’ve NEVER SEEN BEFORE – a real piece of creative innovation that breaks into unexplored territory?
· Thirdly, is the idea wonderfully SIMPLE and easy to understand? Advertising shouldn’t be some hard-to-decipher code that’s only meant to be understood by awards juries.
· Fourthly, has the idea been beautifully CRAFTED – with great writing, art direction, typography, design etc?
A bad campaign simply ignores all these essentials. It does the expected thing badly. Instead of doing the unexpected thing brilliantly well.

Advertising is obviously changing fast lately or as we say, it is under reconstruction. Into what? And how will it look like in the next five (10, 20) years?
Advertising is changing, for sure – but what it’s going to end up as, I don’t think anyone has the faintest idea. In fact, I don’t believe advertising will ever ‘end up’ as anything now – it will simply keep on changing, unpredictably and continuously, and for ever. For those of us who’ve been used to a relatively unchanging advertising industry for the last fifty years or more, that’s a pretty hard fact to get our heads around.
Put it another way, if you’d asked me this question five years ago, any answer I gave would have laughably inaccurate. Think about it: in 2005, both YouTube and Facebook had only just been invented, and we had no idea how they would dominate our media landscape in the way they do now.
Someone, somewhere (probably in a lock-up garage in Shanghai) has just invented something that will be the next Facebook. We just don’t know what it is yet. Or what the thing is that will come after that.

Why is there so little awarded (creative) advertising seen in everyday life? And why all we see is sales-promotion, no-brand-building, pushy-brainwashing? Or do I have a wrong opinion?
Yes, it’s true to say that there is very little awarded advertising seen in everyday life. But let me assure you, that applyes in the UK, too. The uncomfortable fact is that 95% of what our industry produces round the world is at best mediocre hard-sell promotional stuff.
But there’s another uncomfortable fact about our industry – and that’s the worrying proportion of what gets entered into award shows that’s scam or ‘ghost’ work. I’ve always fought against this practice – to me winning awards with fake work, or work for clients that don’t exist, or work that never actually appeared, is simply cheating. It’s like using performance enhancing drugs in sport. Or paying for stuff with forged dollar bills.
And when clients see us congratulating ourselves for producing this ‘ghost’ work, they really must wonder what planet we’re on.
No doubt, the debate surrounding the rights and wrongs of scam work will continue at the Golden Drum this year – but I know which side I’m on.

After graduating in Film and Photographic Arts at Central London Polytechnic, Adrian Holmes began his career as copywriter at Grey Advertising in 1976. In January 1982 he joined Lowe Howard-Spink, just three months after the agency was founded. Four years later, he left the agency to work at Saatchi, and later CDP, then joined Wight Collins Rutherford Scott as Creative Director. In 1989 he returned to Lowe as Joint Creative Director of the London office, becoming the network’s Chief Creative Officer in 1999. In September 2005 he was appointed Executive Creative Director of Young & Rubicam EMEA.

In 1994 Adrian served as President of D&AD. He is still a copywriter at heart, and in between meetings continues to produce advertising for various clients.

A PRESENTATION BY ADRIAN HOLMES: DON’T FORGET TO WRITE

‘Who reads all that stuff anyway?’ they ask. ‘Today it’s all about the power of the visual’. So if writing really is on its deathbed, should we simply turn off the life support machine? Or should we do everything in our power to save it?

In this talk, Adrian Holmes, Creative Director of Y&R EMEA, will attempt ‘the kiss of life’. For him, great copywriting remains one of the most powerful ways our industry has to connect to its audience. Words, he argues, have the ability to change people’s minds about things in a way that pictures alone never can. And if we let that skill die, he believes, the very future of advertising itself may die with it.

We managed to get reply from some of them (highlighted in yellow). Please, see next page. 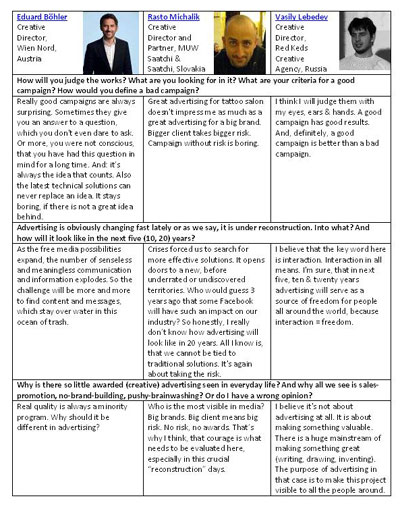