New Yorkers Are Stargazing Based on Ford Escape Sales Trends

• Ford customer buying trends for the new Escape and Explorer’s innovative features reveal Philadelphians unexpectedly prefer green engines the most, San Francisco leans toward geeky options and Seattle residents cruise mindfully with driver-assist technologies
• New Yorkers purchase the highest rates of moonroofs, while Dallas has a leg up for Escape’s novel foot-activated liftgate that customers can open by waving a foot under the bumper
• Ford has introduced a record 60 new technologies the past few years, many of which help Escape increase sales in key coastal and southern “smile-state” markets
• Ford uses car-buying preferences in an effort to better align production with demand

Bucking longstanding trends, Philadelphians are going greener than all other major cities based on sales of the new Escape and Explorer equipped with Ford’s advanced, fuel-saving EcoBoost engine. 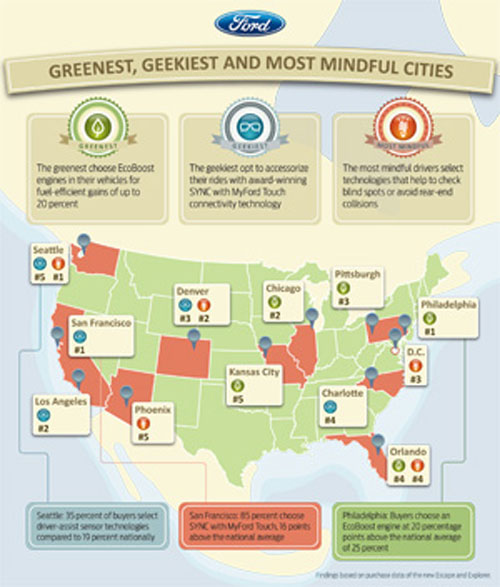 San Francisco residents live up to their reputation as tech-savvy people by geeking out to MyFord Touch – Ford’s award-winning connectivity system – more than any other U.S. city. The rain in Seattle may be getting to the people who inhabit that city, as they opt for features that can help them drive more mindfully.

Those are just a few of the findings from Ford’s annual look at U.S. car-buying preferences. Ford analyzes its U.S. sales data to identify buying patterns and to better understand unique consumer preferences by region. The analysis helps Ford ensure it is delivering the specific vehicles and options to those parts of the country where they’re most in demand.

“Some may be surprised to see Philadelphia top Ford’s EcoBoost engine list, but greener living has become a way of life no longer limited to the coasts as people try to save money at the pump,” said Sheryl Connelly, Ford head of global consumer trends. “Technology has become mainstream, and we are living through an age of information addiction, which means people want to stay connected to their digital lives everywhere – including the car.”

Ford is having success using these technologies to reach new customers in coastal southern markets, by attracting younger buyers with the latest connectivity features and winning back import buyers through fuel economy, safety and other innovations. For example, Escape sales have increased 50 percent in California, increasing share to 9.5 percent of the small utility market there, compared to 7 percent in the first quarter of last year. Toyota is Escape’s No. 1 competitive brand conquest in the Los Angeles region.

San Francisco customers are purchasing SYNC® with MyFord Touch® on 85 percent of Escape and Explorer models, 16 percentage points above the national average. This driver connectivity technology creates an interactive, rich driving experience so the driver can access information and entertainment through hands-free voice-activated technology.

Ford is committed to providing drivers with a safer means to stay connected through the use of hands-free voice-activated technology, which helps drivers keep their eyes on the road and hands on the wheel.

Nationwide, MyFord Touch has exceeded expectations, as it is included in nearly 60 percent of all Ford retail sales, up from 12 percent last year.

“As public demand for practical and stylish advancements continues to skyrocket, metropolitan areas across the country remain key hubs for high-tech growth nationwide,” said Scott Steinberg, technology analyst for strategic consulting firm TechSavvy Global. “Thanks to technology’s growing importance in trendsetters’ lives and the everyday benefits it offers, innovation is thriving from coast to coast.”

In Philadelphia, buyers choose the 1.6-liter EcoBoost® Escape and 2.0-liter EcoBoost Explorer at 20 percentage points above the national average of 25 percent.

EcoBoost engines deliver fuel economy gains of up to 20 percent and reduction of CO2 emissions of up to 15 percent compared to larger, less-efficient engines, without sacrificing the power drivers want.

Seattle seems to be the leader in mindful driving. While on average, 19 percent of Escape and Explorer buyers nationally select an available driver-assist package, 35 percent of buyers do in Seattle. Ford’s innovative driver-assist features can help drivers in stressful situations by monitoring driving patterns and traffic, even helping steer when parallel parking.

Ford’s Blind Spot Information System with cross-traffic alert (BLIS/CTA) is available on Escape and Explorer. BLIS® provides an indicator light to warn drivers when another vehicle moves into their blind spot during normal driving; CTA technology alerts drivers to nearby traffic when they are backing out in a parking lot. Active park assist helps drivers parallel park with the touch of a button and without ever touching the steering wheel. On Explorer, Lane-Keeping System can warn and assist the driver when the vehicle is drifting out of the lane.

“Across America – from its most sprawling suburban areas to its largest industrial centers – technology now plays a defining role in millions’ lives,” said Steinberg. “Going forward, from better ways to connect and communicate to more energy-efficient travel, innovative and eco-friendly solutions are only expected to have a growing impact on how we live, work and play.”

Based on purchasing data for MyFord Touch, EcoBoost and driver-assist technologies in Escape and Explorer, below are Ford’s geekiest, greenest and most mindful cities:

Dallas customers are buying Ford’s foot-activated liftgate on 62 percent of vehicles, 21 percentage points above the national average. The feature provides more convenience by allowing customers who have both hands full to open the liftgate by simply waving a foot under the bumper.

Ford’s inflatable seat belts are designed to enhance protection for rear-seat occupants. The rear inflatable belt functions like a standard seat belt in normal everyday use. In the event of a crash, each belt’s tubular airbag inflates and expands across the occupant’s body. By doing so, it expands its range of protection by diffusing crash pressure over a larger area while supporting the head and neck.