• Honda HR-V arrives in Europe after huge success in Japan and the USA
• Newcomer was Japan’s best-selling SUV in 2014 and in first half of 2015
• In USA, HR-V posts exceptional first month sales
• All-new Honda HR-V will arrive in Europe showrooms this September onwards.

Since going on sale in Japan in late 2013 as the Vezel, the new small SUV’s unique blend of style, space and versatility has catapulted it towards the top of the sales charts. In Europe it will be sold as the HR-V when it arrives this September onwards.

After selling more than 96,000* units in 2014 in Japan and becoming the country’s favourite SUV, the Vezel continued its success by becoming the bestselling car in the SUV category for the past 18 months. To date, the Vezel has attracted over 140,000 Japanese customers with 38,218 sold in the first half of 2015 alone. 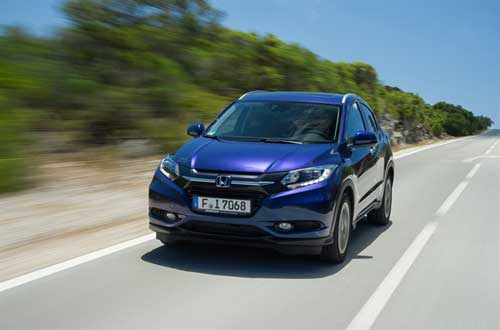 In America, Honda’s SUV sales have experienced strong growth over the first half of 2015, increasing by more than 10% over the same period in 2014. This growth culminated in June, following HR-V’s arrival in dealerships, with a record month for SUV sales, up 18% year-on-year. "The new Honda HR-V hit the ground running with an incredible sales performance in just a half month on the market,“ said Jeff Conrad, senior vice president and general manager of Honda in the US. In its first full month on sale, HR-V posted phenomenal sales of 7,760 units.

Launching in Europe in September, the HR-V incorporates a number of features unique to the region. The ride and handling has been tuned for European roads, while new CVT control logics have been developed to match European motorists’ expectations of automatic transmissions. And with an engine line-up that includes a 120 PS 1.6 litre i-DTEC diesel engine that is only available for Honda vehicles in Europe, the small SUV that has proved so popular in other regions is set to make a big impression in its class.

Jean-Marc Streng, General Manager of Honda Motor Europe, Car Division, said: “We’re very excited about the prospects for HR-V in Europe after it has proven itself to be a big hit in other markets. With styling that combines rugged SUV solidity with coupé looks, a premium interior that offers class-leading space and versatility, and the latest infotainment and safety technologies, we’re confident that the HR-V will be a strong seller when it arrives in showrooms here in the coming months.”

* – Data from JADA via www.best-selling-cars.com.