Sponsored by Primo Insurance and raising awareness for the Nationwide Association of Blood Bikes, Scottish journalist David Finlay, who recently created the online motoring magazine RoofSideUp, piloted the Civic Type R to success, shaving over a second off the old class record and in the process creating motorsport history. 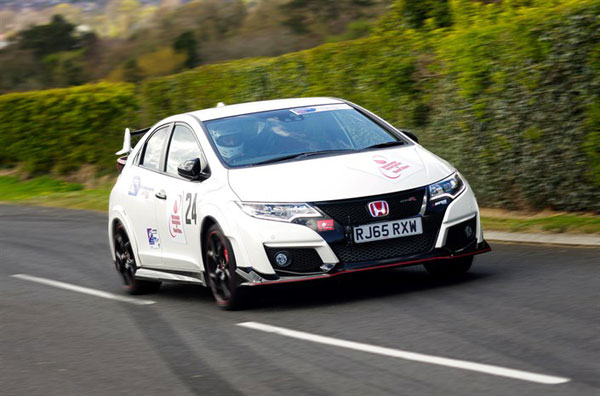 Craigantlet Hillclimb is a speed event organised by the Ulster Automobile Club which was first held in 1913. It is the only such venue in Northern Ireland to host a round of the British Hillclimb Championship, which started in 1947.

Billed as a ‘race car for the road’, the British built Honda Civic Type R is powered by the most extreme and high-performing Type R engine ever built. The direct-injected turbocharged 2.0 litre VTEC TURBO petrol engine delivers power, torque and performance figures unmatched in the front-wheel drive hot hatch segment. Peak power output is 310 PS at 6,500 rpm, and peak torque is 400 Nm at 2,500 rpm – both higher than for any previous Honda Civic Type R model.

Driver David Finlay commented: “I knew the car would be quick, but I had no idea just how quick. If I had left Craigantlet after setting a time in the 57s I would have been happy, so to have got into the 54s was a big surprise. The record run wasn’t perfect by any means – there is definitely more time to come.

“I have driven many standard cars in hillclimbs, and so far the Civic is the one that has felt closest to being designed for the purpose. Honda’s claim that it is a ‘race car for the road’ may seem like an optimistic piece of marketing, but after this weekend I can confirm that that’s exactly what it is.”

Phil Webb, Head of Cars at Honda UK, commented: “The current Civic Type R is on its way to becoming one of the most successful race cars we have ever had. Having taken Gordon Shedden to victory in the British Touring Cars last year, it has now created history at the Craigantlet hillclimb this weekend.”