Ford Motor Company cut CO2 emissions at its global facilities by 37 percent per vehicle between 2000 and 2012 and plans for a 30 percent reduction from 2010 to 2025 by addressing everything from new products and technologies to manufacturing processes. 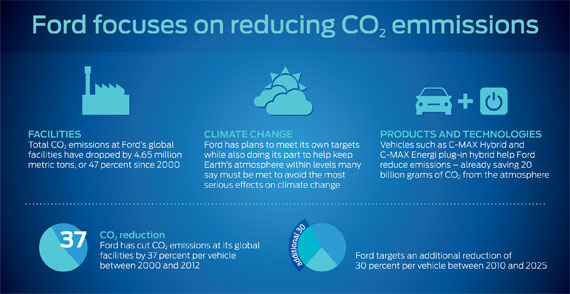 Already, total CO2 emissions at Ford’s global facilities have dropped by 4.65 million metric tons, or 47 percent since 2000. Ford also delivered on its commitment to reduce U.S. facility emissions by 10 percent per vehicle produced between 2002 and 2012, as part of an Alliance of Automobile Manufacturers program. And vehicle tailpipe emissions on a per vehicle basis have dropped 16 percent since 2007 as new vehicles such as Ford C-MAX Energi plug-in hybrid have become available.

And Ford has even bigger plans to reduce CO2 – one of several priorities outlined in its “Blueprint for Sustainability: Our Journey Continues.” Other subjects in the voluntary report range from reduced water use and energy consumption to cutting the amount of waste-to-landfill at Ford facilities around the world.

“In the more than 30 years I have been with the company, I have seen genuine transformation as Ford has integrated sustainability into its business plan, products, operations and relationships with stakeholders,” says Robert Brown, vice president, sustainability, environment and safety engineering. “Water and energy use, waste-to-landfill, Ford’s role in reducing the amount of greenhouse gases like CO2 in our atmosphere – these are just a few of the top sustainability-related priorities considered in every decision.”

Ford Chief Financial Officer Bob Shanks said sustainability issues are embedded in the company’s business plan, and are consistent with its aim to deliver great products, a strong business and a better world.

“We are much more proactive in understanding the importance of sustainability in the broadest sense – not only in relation to our products, but also in the quality of the financial results that we derive from them,” said Shanks, whose perspective is featured in this year’s report.

Ford issued its first voluntary sustainability report in 1999 as a way to summarize and report on the company’s initiatives regarding social, economic and environmental issues. Like Ford’s sustainability-related processes and results, the report has evolved – from a printed booklet similar to an annual report, to being so detailed and comprehensive today that it requires an entire website, which can be found here.

In the early 2000s, Ford’s Climate Change Task Force identified a need to address shifting market trends and government regulations – among many other factors – with regard to reducing CO2 emissions.

Investors also are increasingly showing greater concern about climate change as a material risk for companies, creating a much stronger link between climate-change-relevant information and initiatives – such as the CO2 Model – and access to capital.

“Beyond those imperatives, we had taken to heart our responsibility to contribute to meeting the challenge of climate change,” says John Viera, global director, sustainability and vehicle environmental matters.

Ford has developed products and technologies along with processes at its facilities and plans to meet its own targets while also doing its part to help keep CO2 levels in the Earth’s atmosphere at or below 450 parts per million – a goal many scientists, businesses and governmental agencies say must be met to avoid the most serious effects on climate change.

Take Ford’s EcoBoost® engines – now on more than 600,000 Ford Motor Company vehicles – that improve fuel economy and cut CO2. And since sales began of Ford C-MAX Hybrid and Ford C-MAX Energi plug-in hybrid, more than 20 billion grams of CO2 have been saved. Emissions from C-MAX Energi are less than half the average CO2 that comes from a regular car.

At its facilities, Ford is expanding its industry-leading 3-Wet paint capacity by 50 percent this year – adding the environmentally friendly process to four more plants on three continents. Increased use of this process, which streamlines the painting process, is expected to reduce CO2 emissions by up to 25 percent where used.

And in the last eight years, company scientists have developed the Ford CO2 Model – a business planning tool that takes into consideration data and regulations from, among others, the International Energy Agency, National Center for Atmospheric Research, U.S. Environmental Protection Agency and the National Highway Traffic Safety Administration. Ford also worked with researchers at Chalmers University in Gothenburg, Sweden, and from companies such as BP in the process of developing the CO2 Model.

Ford’s sustainability report is a comprehensive showcase of the company’s efforts to tackle a myriad of sustainability challenges in a rapidly changing world. Specifically, the report addresses Ford’s overall financial health, the fuel economy of Ford Motor Company vehicles, safety achievements and other sustainability-related issues, such as:
• Trained 325 suppliers in sustainability management in 2012 as part of Ford’s Code of Human Rights, Basic Working Conditions and Corporate Responsibility; nearly 2,100 suppliers have been trained through the program
• Reduced waste-to-landfill by 19 percent per vehicle between 2011 and 2012, part of a plan to cut the amount of waste-to-landfill 40 percent per vehicle by 2016 (baseline is 2011)
• Reduced global water use by 1.95 million cubic meters from 2011 to 2012. Based on regional water cost estimates, this yielded more than $3 million in cost savings
• Cut global use of water per vehicle produced to 4.3 cubic meters (one cubic meter equals 264 gallons) in 2012 – down from 4.7 cubic meters in 2011 and 5.1 cubic meters in 2010. The company targets a 2 percent reduction in 2013 and continues working toward cutting water use 30 percent per vehicle by 2015 (2009 baseline)
• Reduced global water use by 62 percent between 2000 and 2012 – equal to about 10 billion gallons
• Established a five-year objective to improve operational energy use per vehicle globally by 25 percent by the end of 2016 (2011 baseline)
• Improved global energy efficiency by 6.4 percent against a 2011 year baseline normalized for weather and production levels