Devised by Felix, Foxtel’s in house creative team, and Clemenger BBDO Sydney, the broadband campaign sees Shatner abseil into a giant WiFi modem to illustrate the ‘Powered by Entertainment’ theme. 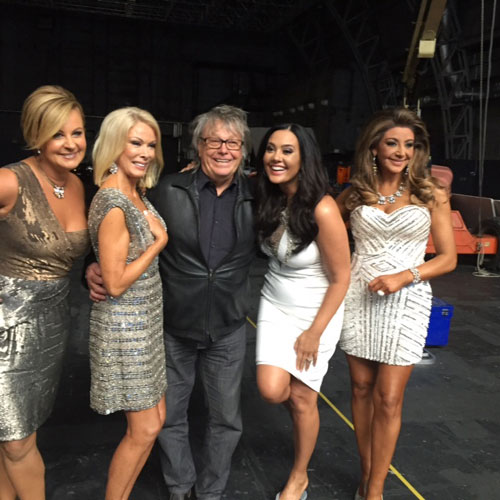 To cater to the availability of the cast, Denneen shot the celebrities out of sequence, predominantly against a green screen. Lots of preparatory work went in to careful storyboarding and the creation of a previs that was then used as a blueprint. Denneen then worked closely with Method Studios and Creative Director, Richard Swan, to create the background environments.

Filming began with Izzy Folau on day one, followed by the Melbourne Housewives, Magda Szubanksi, Matthew Dellavedova and Matt Shirvington on day two. Denneen briefed the Foxtel team via e-mail who shot Daniel Ricciardo on day three, and the last day was the big set day with Shatner and his side-kick Roger, played by Ben Bordeau.

One of the biggest challenges the team faced was not being able to shoot with Shatner until ten days before the delivery date, requiring Method to pull double shifts to ensure that the finished commercial was delivered on time.

Denneen explains: “There are always challenges on every shoot but I love solving problems, so I enjoy the process. With jobs like this, which require a fair amount of imagination and faith in the director, it can be hard on clients and agencies, but I have to say that Foxtel bought into my vision and allowed me to do my thing, which is always a great feeling for a director. It was a dream job and I loved every minute of it!”

Denneen adds: “There’s nothing better than being given a script where there’s a story to be told. This one is a larger than life, tongue-in-cheek piece of entertainment with the wonderful William Shatner at the helm. It had everything I love to do as a film-maker; directing talent, designing sets and VFX. It’s exciting to work out the storyboards, do the previs, and then see it all come together over a period of a few months.”

Anna Fawcett, Executive Producer of Filmgraphics, comments: “When you work with David Denneen, you know you are going to get a first class production. I’ve been working with him for over 20 years and he always delivers. This campaign has so much entertainment and production value in it and it’s tremendous fun.

“Our DoP, Russell Boyd, is the master and his lighting is sensational. The Method team did an outstanding job in delivering the CGI environments and effects. Foxtel were amazing to work with, so we’ve been blessed to come away with a great campaign and good memories – it doesn’t get better than that!”

Denneen was an animator, co-director and co-designer on the Academy Award winning short “Leisure”, produced by Filmgraphics Productions. In 2001, Denneen was among the inaugural recipients of the Australian Screen Directors Association (ADA) accreditation alongside George Miller, Peter Weir, Gillian Armstrong, Bruce Beresford, Ray Lawrence, Phil Noyce and Fred Schepisi. He is also a member of the Australian Cinematographers Association; they acknowledge the creation of a body of work of a consistently high standard. Denneen was voted by his peers as Director of the Decade for the 80’s and again for the 90’s and was honoured by the award committee into the Hall of Fame in 2009. In 2088 he released his first feature “Restraint” starring Travis Fimmel from “The Vikings”, Stephen Moyer from “True Blood” and Teresa Palmer from “Warm Bodies”.

Denneen is the founder of Filmgraphics Entertainment, universally recognised as one of Australia’s foremost film production houses. He has won every major international and national advertising award, including Cannes, Clio, LIA, Award, One Show, NYF, Adfest and an Oscar. He is an inspiration to everyone in the business for his dedication to creativity, for the mentorship of young talent, and passion he shows on every project that comes his way.

Filmgraphics Entertainment stands for excellence in direction, animation, design and post-production. Founded by legendary director David Denneen, the company has earned its place as one of the most experienced and highly acclaimed production houses in the world. For over 45 years we have maintained a dominant role in the industry winning every major national and international award including an Academy Award for Best Animated Short Film, “Leisure”. Filmgraphics Entertainment directorial roster features the talents of: David Denneen, Ariel Martin, Gracie Otto, Dylan Harrison, Shane Abbess, Alina Gozin’a, The Real McCoys (FG represents in Aus) and Mike Oldershaw (FG represents in Aus).