Pum Lefebure, Co-Founder and Chief Creative Officer of Design Army, has been announced as a speaker at the London International Awards 2015 Creative LIAisons program.

Lefebure, who joins Keynote Speaker Daymond John at this year’s event, adds to an all-star line-up of speakers who will be revealed in the coming weeks.

Lefebure comments: “As a Creative Director, business owner, brand builder, designer, and mother, I have a lot to share and it’s not just through Instagram. Throughout my career, I’ve trained designers and seen them grow and flourish; it’s one of my greatest contributions to the industry.” 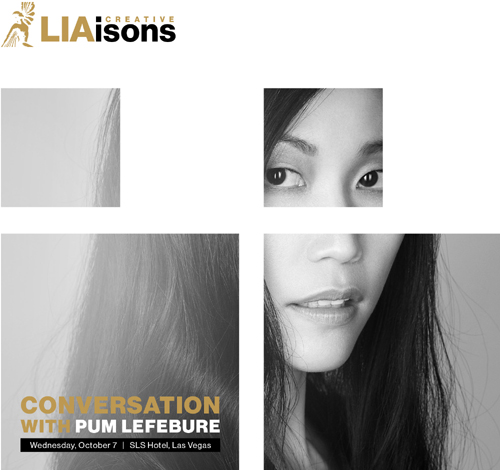 She added, “Our role at Creative LIAisons is to guide new talent through successes and failures, teaching them to integrate creativity into work and life to kick ass 365. Learning is a lifelong process: I hope to discover as much from the upcoming generation as they will from me.”

Lefebure is a co-founder and chief creative officer of Design Army in Washington DC. An award-winning creative director and savvy business leader, she has dreamed up and developed numerous high-profile campaigns worldwide. The Thailand native brings a global sensibility to American design and Lefebure’s hallmark is a distinctive union of the artistic and the commercial, proving that good design is the cornerstone of good business.

Lefebure will be speaking to more than 100 young creatives who will take part in the Creative LIAisons program that runs concurrently with the LIA judging in Las Vegas. 2015 will be the fourth year in which LIA will host Creative LIAisons (formerly known as ‘Creative Conversations’). This mentoring program is LIA’s way of giving back to the industry by fully funding the travel and accommodations for the young creatives, who will experience three days of educational and inspirational speakers on various topics, along with one day of sitting in on the jury’s statue deliberations. They will also have networking opportunities with the jurors and speakers outside of the sessions.

The LIA 2015 Entry System is now accepting entries through August. Judging will take place from 1st October to 10th October. The shortlists will be announced as each judging session concludes, with winners being announced 10th November. For more information on submissions and eligibility please visit //www.liaawards.com/enter/eligibility/.