22nd International Advertising Festival Golden Drum and DDB Worldwide realise that young creatives are the goldmine of engaging ideas. For that reason we invite young creatives to come up with ideas that make a change in our industry; that truly Beat the Drum for Change.

The 2015 Challenge of the annual Beat the Drum for Change Young Creatives Competition is: “Ageism”.

People start vanishing from advertising already in their higher middle age. Unless you don´t mind thinking about a different career after only 10 – 15 years, it’s time to stop it. 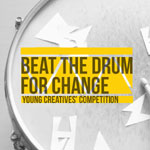 We invite young creatives less than 30 years to present their ideas in a presentation (PPT or keynote) not longer than 10 pages for a media campaign on how to combat the challenge of overcoming the issue of AGEISM.

Think about a campaign in media (mass or direct) consumed by the management of advertising agencies which would encourage them to hire older people. Think about how to reach these older people and how could you help them raise their confidence and close the self-fulfilling prophecies. Who could drive this change and get the message out there; a celebrity, an HR representative or someone from client side? Perhaps it could be you, fresh beginners? How could you help? Think about forms of positive discrimination – you might get inspired by positive discrimination for young talents or campaigns and movement against racism or sexism (feminism).

To present your ideas you can either prepare a case video or a presentation (ppt or keynote) no longer than 10 pages. Only authors, born after 16 October 1985 from countries of New Europe can participate in the competition. Please refer to the sources listed in the brief.

Beat the Drum for Change Jury will be announced in the following days.