All entries were considered three times, first in the Products and Services section regardless of the media, second in the Best of Media section and finally in the Best of Ad Making section.

The Yubari city use to be known by its coal mining. After most of the mines closed down, to compensate Yubari shifted its focus to tourism. Sadly all the newly constructed tourist attractions failed too. Resident began to leave, population shrank and the city declared bankruptcy. To find ideas to save the city a brief was sent to Beacon Leo Burnett Japan. After some research the agency came to some stunning discoveries. Yubari was the city with the lowest divorce rates in Japan.

The agency came to an idea – a city with “No money but love”. They created an icon for the city “Yubari-Fusai”, a double character that plays on the word “Fusai” that in Japanese means both debt and spouse. The mayor proudly declared that Yubari was the city of happily married couples and official happily married certificates were issued to both locals and visitors. Newlyweds from all over the country came to the city to bless their union.

The whole city mobilized behind the idea and soon the city was full with Yubari-Fusai branded confectionary, beer, complication CD’s, toys…The amount of free PR generated

by this efforts exceeded all expectations. The icon became talk of the town, the country and the TV viewers. The number of visitors of Yubari has increased 10 % year on year and over 31 million $ generated toward alleviating the debt.

“No money but love”. With the power of love and the strength of a powerful human centered idea Yubari city is making a positive stand forward to its full recovery. The people of Yubari can once again take pride in their city.

All awarded entries you can see on ADFORUM, XIPAX and all participating festivals’ web sites. The list of all nominees and winners is also available at //www.thecupawards.com/competition/winners-237766/

The CUP is the only global festival in the world that specifically celebrates GENIUS LOCI, the spirit of the place. The mission is to protect and to praise locally inspired creativity – the richness of language, culture, superstitions, beliefs and rituals that make each region unique.

The CUP celebrates ‘genius loci’ – the spirit of local places. Its mission is to celebrate locally-inspired creativity, which makes THE CUP the only global festival in the world that specifically celebrates the richness of language, culture, superstitions, beliefs and rituals that make each region unique.

Michael Conrad, President of the Berlin School of Creative Leadership and jury member at all four CUP competitions:
“Many local ideas have a freshness and uniqueness that can shake the world. Yet these ideas don’t always get the recognition they deserve at global festivals. In a homogenized world, local values are losing ground. And by diminishing their importance for local people, nations lose their identities, and as they lose identities, a significant part of humanity is lost.”

On March 11 and 12, after the judging process, The Creative Summit took place in Conrad Hotel in Istanbul. Multi cultural Program was very attractive, actual and fresh, the speakers came from four continents. More on www.thecupawards.com 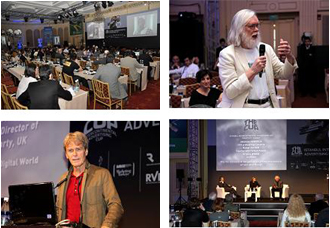 Mark Tutssel, Chief Creative Officer, Leo Burnett Worldwide:
“It was an honour and a pleasure to attend the CUP in the inspiring city of Istanbul. The show was run beautifully and the Saturday evening was a huge success. Congratulations to organizers.”

Jure Apih, CEO of ICAC at the Awards Ceremony:
“It’s very popular now to speak about creative industries, in which the human mind, inspiration and creativity are more important than capital, machines and low-cost labor.

And if we agree that advertising is the strongest accelerator of business and economy, it obviously follows that advertising can also be the most important bridge to other creative industries.

It is a no-brainer that Istanbul is an ideal place for the fusion of very diverse ideas from all parts of the world and from many complementary creative fields, but there is also something even more important: creativity needs fresh air and lives on optimism.

I don’t know any other city in the world that radiates optimism as strongly as Istanbul does today.”