The new Opel Corsa has been voted “AUTOBEST 2019”, the European accolade for `The Best Buy Car of Europe in 2020`. With a total of 17617 points, the new Corsa clinched first place by only 157 points over the new generation Peugeot 208. In percentage, on the total number of allocated points in the Final 5, the difference represents only 0.2%! The Skoda Kamiq came in third place with a total of 16848 points, only 612 points less than the new 208. The Renault Clio and Nissan Juke followed in the overall rankings. Detailed results will be listed in the Final Ranking section on www.autobest.org.

“It was a very balanced Final 5. All the finalists are great examples of what is today ‘a best buy car’ on our continent. The mission of the Jury was not easy, and the difference on the podium is very small. But in every competition must be a winner, and the winner is the new Opel Corsa, ‘The Best Buy Car of Europe’, said Ilia Seliktar, Jury President.

“Last year, at AUTOBEST we said that the next winner of Best Buy Car of Europe should be an electrified brilliant new product. It is exactly what happened, and the new Opel Corsa is a perfect example of electrification for the masses. Thanks to the multi-energy platform, the new Corsa addresses everybody in Europe by offering both ICE and EV versions. Our AUTOBEST winner is the first car in our history starting to build the link between now and tomorrow, between classic and avantgarde propulsions and technologies. The new Corsa is the first eager to democratise the future of electric motoring, making people in Europa to embrace the future confidently as the next normality,” said Dan Vardie, AUTOBEST Founder & Chairman. 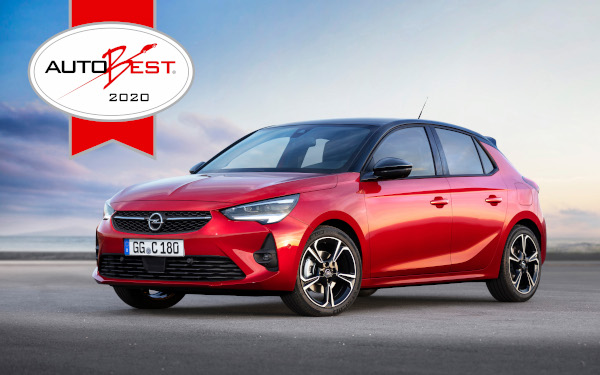 This year the Final 5 Test was held on Istanbul City Park, on the famous F1 circuit and nearby roads.

It was the most complex and relevant package of tests ever done in the AUTOBEST history.

With 31 countries represented, AUTOBEST is the largest independent motoring Jury in Europe that represents 95% of the European population.

The ‘DESIGNBEST 2019’ award goes to Luc Donckewolke, making him the newest member of AUTOBEST’s unique ‘DESIGNBEST Hall of Fame’ dedicated to most successful car designers we have in the industry. The Belgian is currently the Chief Designer of Hyundai Motor Group – including Kia – after he was initially hired for Hyundai’s Genesis luxury division. He also made his mark in the design departments of Audi, Bentley and Lamborghini. At 54 years old, Donckerwolke is one of the most accomplished designers in the world, ready to embrace new challenges as he is now leading the Korean group.

AUTOBEST Jury members voted for Mazda Skyactiv-X as the winner of ‘TECHNOBEST 2019’ award. Taking the hard way, the Japanese engineers designed and developed a remarkable new approach of gasoline engines aiming to combine the benefits of diesel technology with the gasoline engines advantages. They managed to overcome all the hurdles other car companies’ teams of specialists tried, but failed. Skyactiv-X is a great innovation who show that ICE might stay longer giving a new chance for traditional fuel.

For the outstanding contribution of connecting driver and artificial intelligence in the car, the ‘SMARTBEST 2019’ award goes to SKODA for its LAURA Personal Assistant. Available in Kamiq and Scala models, the voice-controlled digital assistant Laura fully complies with a key AUTOBEST philosophy: bringing new, easy-to-use technology. The AUTOBEST jury highly appreciates the fact that this is the result of an in-house development by Skoda engineers, whereas such systems usually come from companies outside the automotive industry. It shows that cars do not necessarily have to be software carriers from technology companies.

The Volkswagen ID.3 is the winner of ‘ECOBEST 2019’ award. This model is the first implementation of the new MEB platform, which is expected to catapult the Volkswagen Group in the era of EV, faster and bigger than any other carmaker in the world. Starting with ID.3, MEB will be responsible for millions of EVs to be deployed around the world by 2025, in addition to other announced cooperations like the one with the Ford Motor Company, but also others to come in the future. ID.3 has a tremendous mission to open this new saga of Volkswagen, creating the next level of the Golf-like legend.

announced after Frankfurt Motor Show (please see www.autobest.org). The 19th AUTOBEST Awards Festivity will take place on February 13th in Mainz, Germany. Following the tradition, the AUTOBEST International Jury presents the awards in a different country each year. The previous AUTOBEST Gala was held in Brussels, Belgium.
The European AUTOBEST Jury thanks the readers from all Europe for encouraging the project and the various PR departments responsible in the automotive industry for providing all the support in organising meetings and drive tests of the new products.