The Fiat Tipo/ Aegea, has been voted “AUTOBEST 2016”, becoming the first brand in the AUTOBEST history to win three times the European accolade. With a total of 1,492 points, the Fiat Tipo/Aegea clinched first place by just 7 points over the Opel Astra. The Hyundai Tucson is came in third place with a total of 1,145 points. The Honda HR-V and Mazda CX-3 closely followed in the overall rankings. Detailed results will be listed in the Final Ranking section on www.autobest.org.

“This was a very strong competition. The vote of 26 Jury members – a first for AUTOBEST – coming from all around Europe was tight. The winner’s margin is just few points, showing how good the Tipo and Astra were. Also, the other Finalists performed extremely well, a clear sign that today we have outstanding products for European customers.” Ilia Seliktar, AUTOBEST Jury President said.

“The FIAT Tipo / Aegea is “The Best Buy Car of Europe in 2016”. The new Tipo family was built around the strategy `a great car for a budget` and not a `budget car`. The result is an outstanding product, with all the ingredients needed by an average customer of Europe. Design, engines, perceived quality, comfort, versatility. Tipo is the new expression of the functional side of Fiat brand. And the new proposition of `value for money` concept. On behalf of AUTOBEST, it is my pleasure to congratulate all the people involved in the Tipo/ Aegea project engineers, designers and people who manufacture the car for this wonderful confirmation of their outstanding job.” said Dan Vardie, AUTOBEST Founder & Chairman. 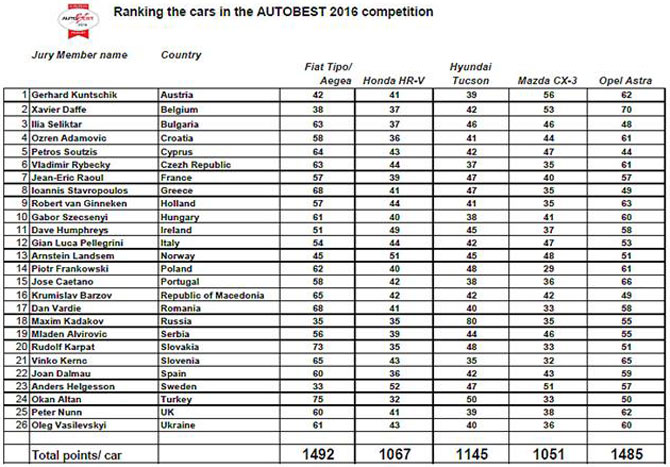 “COMPANYBEST 2015” is awarded to Koç Holding Automotive Group. Dating back to 1926, the Koç Group is the leading conglomerate in Turkey. Always one step ahead of change, the Group has become one of the largest and most successful groups in Turkey and in the Region; comprising more than 100 companies, 90,000 employees, and 10,000 dealers, agencies, and after-sales services. Koç Holding is the only Turkish company to be listed in Fortune Global 500 list. The Group enjoys leading positions in automotive, energy, finance and white goods sectors. The Group has a significant position in the Turkish economy in terms of revenues, exports, taxes, share in Borsa İstanbul’s market capitalization and employment. Koç Group focuses on sustainable and profitable growth with consistent leadership positions in Turkey as well as in the Region with the intention of being an important player worldwide. Koç Holding Automotive Group; covering Tofaş, JV with Fiat Chrysler Automobiles (FCA), Ford Otosan, JV with Ford Motor Co., TürkTraktör, JV with CNH, Otokar and Otokoç is the leader in the Turkish automotive sector, in terms of sales, exports and production. The umbrella covers Ford, Fiat, Alfa Romeo, Lancia, Jeep, Ferrari, Maserati, New Holland and Case brands.

The “ECOBEST 2015” award is going to International Council of Clean Transportation (ICCT) for the outstanding activity of a non-profit organisation dedicated to reducing vehicle emissions. John German, US co-leader of ICCT led the team that helped expose Volkswagen’s emissions reality. ICCT made the decision to look for NOx emissions in the US, where the emissions standards are more stringent. The ICCT has been investigating high NOx emissions from diesel cars since 2013, abandoning standard emissions lab tests in favour of on-road tests conducted under ordinary driving conditions as well as using independently sourced cars.

Ikuo Maeda, Mazda Chief Designer is the winner of “DESIGNBEST 2015”. Breaking with the modern-day reliance on computer-generated design, Ikuo Maeda took Mazda to the old school. He overhauled the design process to begin every project with sculpting and handed the clay modelers even more clout in steering a vehicle’s style. The shift began in 2009 when Maeda took the reins, but it is appearing just now in the bold, head-turning Kodo design language that has analysts raving about Mazda’s latest lineup. His role in the dramatic change of Mazda is crucial.

SMARTBEST 2015” choice of the AUTOBEST Jury is TomTom Navigation and Traffic. Dynamic routing in the TomTom system doesn’t examine the complete routing options as a route calculation would, but it does look at a number of alternative routing corridors between your current location and your destination, having a different and more effective way of collecting traffic information and delivering it to the device. It is simply, the most reliable traffic system yet. An outstanding result making the difference for everyday motorist’s life.

Volvo Drive-E engines convinced the Jury to win “TECHNOBEST 2015” award. New generation of Drive-E powertrains is combining power, efficiency and superior experience, also being a commitment to sustainability. It delivers low-fuel consumption and emissions of a four-cylinder engine with the performance of a six or eight-cylinder. With these powertrains, VOLVO is showing new strengths beyond the traditional `core value` of safety.

The 15-th edition of AUTOBEST AWARDS FESTIVITY will take place February next year, in Milano, Italy. Following the tradition, AUTOBEST International Jury grants the awards in a different country every year. This is the first Gala after the European expansion of AUTOBEST Jury announced in September in Frankfurt on the eve of IAA motor show. Last edition, the festivity was held in Zagreb, Croatia.

The European AUTOBEST Jury thanks the readers from all Europe for encouraging the project and the PR responsible in the automotive industry for providing all the support in organizing meetings and drive tests of the new products.

The AUTOBEST organization was created in 2001 with the revolutionary concept of “best buy car” available on the European market. Nowadays 26 European nations are represented in the Jury, covering more 91% of the European population. To become an AUTOBEST winner a car must represent the best offer for most European customers. Price, service network, spare parts distribution and versatility are the most important criteria in the voting process. Design and new technologies are becoming important criteria for voting. AUTOBEST uses a transparent voting system, with a complex matrix of 13 criteria in order to decide the winner.