The film which leads the online campaign, directed by Finn Keenan of Motherland for ROTHCO, sets the scene like a punchy heist film. We’re introduced to the key players and what may have initially been perceived as a moment of crisis is quickly turned on its head.

Art Director, Paddy Thunder comments, ‘We thought this approach would set up the story and the challenge for the guys in a unique way and make the content feel like a different kind of hidden camera piece.’ 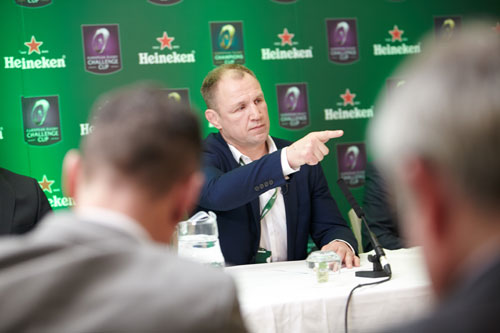 The story begins innocuously enough by tweeting an image from the set of a new commercial featuring the infamous Neil Back, known to Irish rugby fans as the man that illegally used his hand in the dying moments of the 2002 Heineken Cup final, thus denying Munster fans their first tournament victory. However, the image also included an official call sheet that appeared to display Neil’s phone number. This was picked up on twitter and by online media and was quickly circulated to the public at large. Soon the phone was ringing off the hook with calls and texts as Irish fans took their chance – in no uncertain terms – to remind Neil of his past misdemeanour.

This was just the first step of a carefully planned campaign however. ROTHCO selected the messages and voicemails from some of the wittier participants and called them back, pretending to be Neil’s personal assistant. They were given the impression that in the confusion of the leak, Back’s PA had mixed their number up with that of a sports journalist and offered them the chance to collect complimentary tickets for the Leinster’s semi-final clash with Bath in the Champion’s Cup. All they had to do was turn up at a local hotel and give their name.

Copywriter, Connor O’Hare explains, ‘We were looking for resourceful young men that would chance their arm if they found themselves thrown in to an unpredictable situation. We also wanted to make it feel as real as possible, so we used hidden cameras and long lenses to create a documentary style.’

Phase three of the campaign is what really tests the fan’s nerves. After unsuspectingly interrogating their credentials, the chancers are thrown in to an unannounced press conference. Faced with an intimidating environment, the man they had insulted and the need to perpetuate the situation they had just created for themselves, how would they handle the pressure? Would they be able to run with it?

They don’t disappoint. The online film, released by Heineken on 16th April documents the results. One things for sure; the Irish rugby fan is a resourceful and witty beast, always up for the adventure of crossing his borders.

Art Director, Paddy Thunder comments, ‘The amount of planning involved in this project surprised all of us. While the idea seemed relatively simple on paper initially, the amount of scenarios that we ended up having to plan for blew us away. For the initial Twitter “leak” phase alone, over twenty possible scenarios were written up and planned for. What if two of the people we called back knew each other and tweeted that something fishy was going on? What if the level of abuse for Neil crossed the line? The list was endless, and that was before we even got to the hotel.

Like with any idea though, entering the unknown is just a sign that you’re doing something new, which is what made the project so exciting to work on.’

ROTHCO’s ground-breaking work has been recognised by the industry with awards from The Marketing Society (UK), Webby, MIDAS, ICAD and Shark Awards; and lauded in the press locally and internationally. The increasing new business wins and client work sees ROTHCO continue to expand its team with an additional 20 staff being recruited in the past six months bringing the head count to 140 staff based in their Dublin office.

The agency will return to the Cannes Lions Festival of Creativity in June 2015 with client, Heineken, who will be awarded the prestigious ‘Marketer of the Year’ Award. 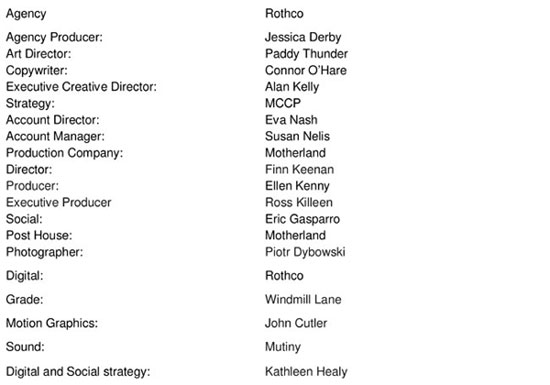