Tutssel comments: “Tomorrow’s marketing landscape is a blank creative canvas for the next generation of leaders. It offers an endless playground for brave, imaginative and impactful ideas to be made. 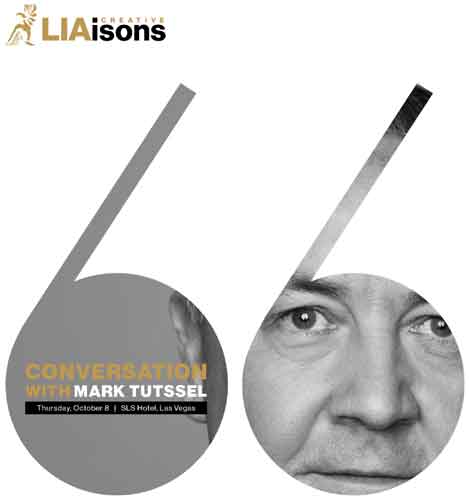 Our future leaders need inspiration, guidance and a community. That’s precisely what Creative LIAisons offers. I’m delighted to be part of this highly valuable program and look forward to sharing the stage with my peers.”

Barbara Levy, President of LIA, stated, “We are thrilled that Mark is once again speaking at the newly renamed Creative LIAisons. Mark has been a proponent of this initiative from its inception. He really understands the importance of giving knowledge and allowing the attendees a look into the jury rooms.
I would like to personally thank Mark and the talent at Leo Burnett for generously providing LIA with the branding and design for its Creative LIAisons program.”

Tutssel is set to speak to the more than 100 young creatives attending the fourth annual Creative LIAisons program. Creative LIAisons (formerly known as ‘Creative Conversations’) runs concurrently with the LIA judging in Las Vegas and is LIA’s way of giving back to the industry. This mentoring program is fully funded by LIA, encompassing travel, accommodations, rewarding speaker presentations, a peek into the statue deliberations and various networking opportunities with jurors and speakers in a relaxed social setting.

As Chief Creative Officer of Leo Burnett Worldwide, Mark Tutssel serves as the global network’s creative leader and is responsible for setting the creative vision for the network’s 85 global offices, helping Leo Burnett move up to the 3rd most awarded network in the world. Under his creative leadership, Leo Burnett has developed world-class campaigns for some of the world’s most iconic brands.