This commercial flight is part of an ambitious Company programme to contribute to the fight against climate change.

This innovative project encapsulates Air France initiatives in the sustainable development sphere. This fully-optimized flight shows that the Company intends to reconcile the development of air transport with control over its CO2 emissions.

Air France’s determination to conduct its business operations in a sustainable, responsible manner is central to the corporate plan, which emphasizes its societal responsibility and commitment to stakeholders.

Use of a 50% mix of sustainable biofuel

By using a mix of conventional kerosene and biokerosene made from hydrogenated used vegetable oils, Air France flight AF6129 acted directly on the main source of aircraft CO2 emissions. Emissions on this flight amounted to 54g of CO2 per passenger-km – half that emitted on a conventional flight.

The biofuel used constitutes a renewable, sustainable energy source which has none of the environmental or social impacts linked to the use of agricultural biomass: made from used vegetable oil, this type of biofuel does not compete with the food chain nor does it deplete water resources. The use of this type of sustainable biofuel was recognized by the American Society for Testing Material (ASTM), a standards organization that drafts and publishes technical standards, in summer 2011.

Over the entire life cycle, emissions are reduced by up to 80%

The kerosene fuelling of the A321 operating the flight was carried out by Airbus, which guaranteed that the quality of the fuel would be maintained from its delivery to Toulouse until it was pumped aboard.

Air France has been actively involved in the development of sustainable biofuels for a number of years. On 25 September 2008, the Company signed a sustainable biofuels charter drawn up in conjunction with NGOs such as WWF and the Natural Resources Defense Council (NRDC). Air France KLM is also a stakeholder in research carried out by the Roundtable on Sustainable Biofuels (RSB), whose sustainability criteria were recognized by the European Commission in July 2011.

To reduce fuel consumption and cut CO2 emissions at the same time as they guarantee flight safety, Air France’s pilots, in conjunction with air traffic control, applied the most fuel-efficient procedures in each flight phase.

In all, some 11,000 metric tons of CO2 would be saved if all La Navette shuttle flights were able to apply these eco-piloting flight procedures.

Ground procedures:
• The use of electrically-powered generators is preferred to supply the aircraft and its climate control systems, rather than deriving power from kerosene-burning internal combustion engines.
• Taxiing after touchdown is done with one of the two engines shut down. This taxiing procedure using a single engine is, in fact, applied on a daily basis by all aircraft taxiing at Paris-Charles de Gaulle and Paris-Orly airports as part of efforts to save fuel.

In-flight procedures:
• Climb and descent phases were operated continuously, ie, without recourse to intermediary periods of level flight, which are known to generate noise and emissions. In the past, Air France has extensively cooperated in evaluating and deploying these procedures with DGAC, the French civil aviation authority, and implements them whenever air traffic control so authorizes, depending on the degree of airspace occupation.
• The aircraft’s trajectory was also optimized to select the shortest possible flight path and the most economical cruising altitude. The constant search for the optimum flight level and speed are sources of fuel savings and on this flight led to a 10% saving compared with a conventional flight.

Since the first completely optimized transatlantic flight on 6 April 2010 to reduce gas and noise emissions, Air France organizes daily optimized transatlantic flights. This is the case between New York-JFK and Paris-Charles de Gaulle by Airbus A380. On each of these flights, Air France reduces its CO2 emissions by 3 to 5 tons by optimizing each phase in coordination with air traffic control.

Lightening the aircraft is a priority quest in every area: every kilogram of weight removed represents a saving of 80 metric tons of CO2 per year.

The aircraft on the fully-optimized Toulouse-Paris flight was equipped with a new seat that is both lighter and more comfortable, as is the Company’s entire short-haul fleet. Weighing 40% less than the conventional seat, it combines comfort and eco-friendliness. In addition to providing increased leg-room, the seat also helps to save 1,700 metric tons of jetfuel a year.

In addition to seating, all cabin equipment is concerned, including serving equipment (containers, trolleys, storage) whose mass is being reduced by an average 15% per year between 2006 and 2012. 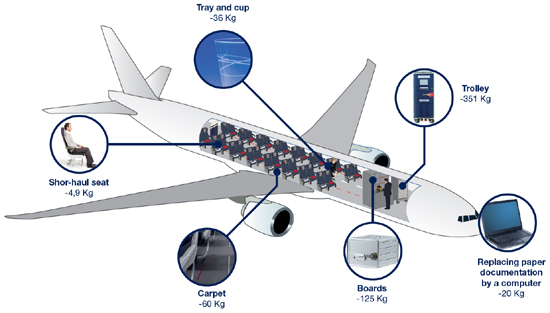 Air France is pursuing a long-term ambitious policy to improve the energy performance of its aircraft.

Fleet modernization is an Air France priority. With an average age of 8.9 years for its long-haul fleet, and of 9.5 years for its medium-haul fleet, the Company operates one of Europe’s most modern and rationalised fleets. The Air France-KLM group is also pursuing a long-term fleet renewal strategy, as shown by its order for 110 new long-haul aircraft approved in September 2011.

These aircraft, which will go into revenue service from 2016, will deliver reductions in fuel consumption in excess of 15%, and a substantial reduction in noise hindrance and emissions. 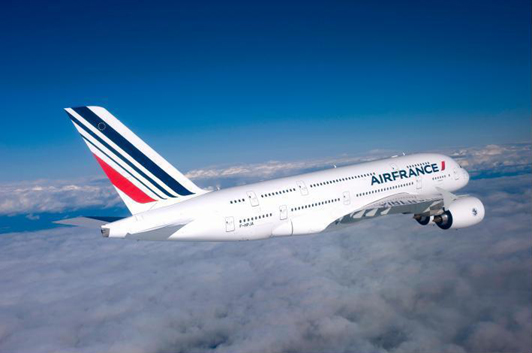 In another development, Air France KLM was voted airline industry leader for 2011 for corporate social responsibility and confirmed in the World and Europe indices of the Dow Jones Sustainability Index (DJSI). On the strength of performance, the Group leads the airline sector for the seventh time, and for the third time ranked top in the extended “Transport and Leisure” sector.