The Honda HR-V has triumphed at the 2016 Tow Car Awards, with the 1.6 i-DTEC SE manual taking the class winner in the ‘up to 1400kgs’ weight class.

Organised and judged by experts from Practical Caravan, What Car? and The Camping and Caravanning Club, a total of 41 cars were entered into the 10th Tow Car Awards and over 440 cars have been tested since the awards were launched in 2006. 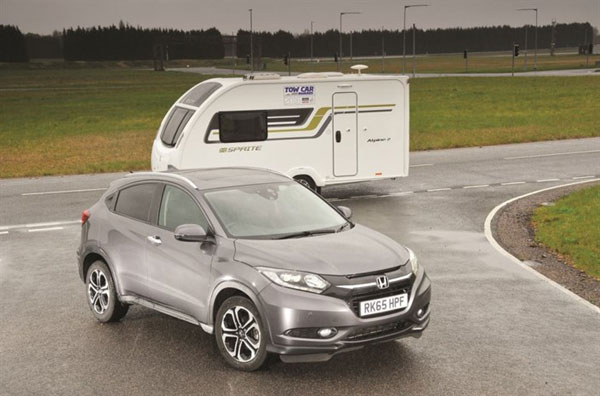 The latest incarnation of Honda’s popular crossover launched last summer after a long hiatus and is already proving popular with Honda’s retail network which is unable to keep up with demand. Originally launched in 1999, the first generation of the HR-V was an early pioneer of the small crossover segment.

Priced at £22,440, the 1.6 i-DTEC SE manual has a kerbweight of 1399kg, a maximum towing weight of 1400kg and a towball limit of 70kg. It also comes with city brake active system as standard, electric windows and mirrors, Honda’s Magic Seats ® and front and rear parking sensors.

David Motton, Tow Car Editor of Practical Caravan magazine, commented: “Towing at a steady 60mph, the HR-V is as comfortable and composed as you could wish for. It kept its cool in our violent lane-change test, too. We kept increasing the speed of the test, and the Honda kept on going just where the driver pointed it. With 221lb ft of torque, there’s enough pulling power for respectable performance when towing, going from 30-60mph in 16.8 seconds with a caravan in tow. It’s a very impressive tow car for little more than £22,000. The verdict: great stability and a practical, ingenious cabin.”

Phil Webb, Head of Cars at Honda UK, commented: “The powerful diesel engine in the relatively small HR-V makes it perfect for towing, providing owners with very good driveability whilst retaining strong fuel economy. Couple the increased height compared to a hatchback, making for fantastic visibility, with the slightly more comfort orientated suspension settings, for a more relaxed drive, and customers have a winning combination.”