A fully refreshed 2015 model line-up, news on further new models and a significant investment in its UK manufacturing base signal Honda’s intention to work towards a European sales level of 200,000 units annually. Philip Ross, Senior Vice President of Honda Motor Europe, announced this as part of the company’s press conference at the 2015 Frankfurt Motor Show. 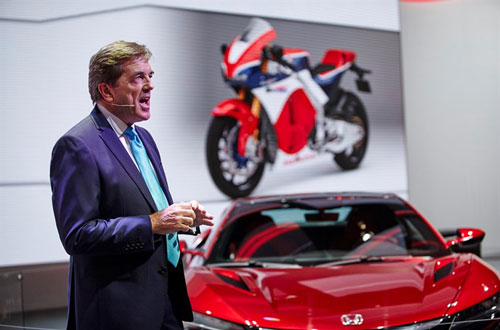 Mr Ross outlined plans to build on the momentum created by a series of new model introductions in 2015. The launch of the all-new HR-V and Jazz, the exciting Civic Type R high-performance hatchback, and refreshed Civic and CR-V families have given Honda one of the youngest product ranges in the industry. Early response from customers and media alike has given a new momentum to the brand in Europe.

“We are confident that this range will satisfy and delight our existing customers, and bring in many more, as the breadth of our range and the quality of our product broadens the appeal of Honda to an ever wider audience,” said Ross.

The focus on Honda’s commitment to pushing boundaries will be magnified again next year, with the start of mass production of the all-new NSX, a hybrid supercar featuring cutting edge technological advancements that epitomise Honda’s daring spirit.

Ross also confirmed the 10th generation Civic is scheduled for a European launch from early 2017, with production of five door variants exclusively from Honda of the UK Manufacturing (HUM). In order to prepare for this new model, Honda has invested €270m in new production technologies and processes, bringing the total investment in the site to €3bn since 1985.

“2015 has been an important year for Honda, but it’s very much the start of things to come,” concluded Ross.