Corporation and 2004 FIM Trial World Champion, Takahisa Fujinami have extended their contract, confirming his position in the Repsol Honda Team until 2015 season, marking his 20th year in the World Championship.

In 1996, Fujinami had his debut race in the World Championship at the age of 16, and just one year later he won the first of his 32 career victories. His most recent victory was during the inaugural race of the 2014 season in Australia. Fujinami now has a total of 150 podium finishes in his career, more than any current active rider in the Trial World Championship. 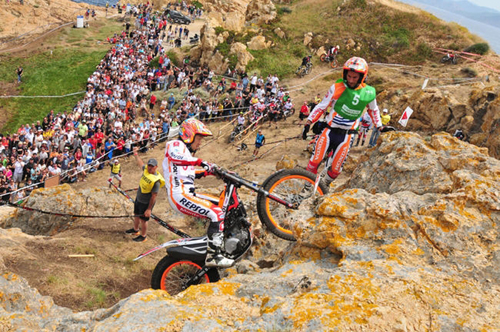 “I am very happy to be able to make the announcement that I will be part of the Repsol Honda Team one more season. Since I was 16 years old, I have had a contract with Honda, and with the Repsol Honda Team I will compete my 20th year in the World Championship. It is for this reason that I am very proud of being able to continue with Honda. Renewing a contract at this early is very important to me and is, without a doubt, one more reason that motivates me to compete. I am also very happy to hear that Toni Bou has also been renewed; he is the team’s number one and a good friend. This is a great team, the best in the Championship.”

“We are very satisfied that Takahisa Fujinami will continue riding for the Repsol Honda Team. As most of you already know Takahisa has been competing in the Trial World Championship for the last 19 years and is the only Japanese rider who has been a constant contender for the Championship. He is a unique competitor, and he has great ability as well as a will of iron: so far this season, he won the first day in Australia and ended in third position after the first day of the Japanese Grand Prix while suffering from a knee injury. He will continue riding for us and for all the motorcycle racing fans next season, too.”