The Civic Hatchback Prototype received its global premiere at Geneva Motor Show, previewing the exterior design of the forthcoming tenth generation Civic hatchback , scheduled for a European launch in early 2017.

The prototype promises provocative design, assertive dynamics and a range of all-new turbo petrol engines, aimed at the core of the European compact segment. Produced at Honda of the UK Manufacturing (HUM), the car will be exported to global markets, including the US.

Details of two further European product launches in 2016 were also confirmed at the show. Following the announcement of US pricing details at Detroit Motor Show in January, European pricing for NSX will start from around €180,000 and deliveries will commence from autumn.

The Clarity Fuel Cell was also made its European debut and is the world’s first production fuel cell saloon to house the entire powertrain under the bonnet. To read more about what was on display at Geneva Motor Show, click here. The full press conference:

UK based performance sports car manufacturer Ariel Motor Company has renewed an exclusive engine supply deal with Honda for its Atom and Nomad ranges. It comes as the 1,500th Honda-powered Ariel in 16 years rolled out of the factory. The Ariel Atom is powered by the supercharged Civic Type R engine, delivering a scorching 350bhp and top speed of more than 155mph. The new off-road Nomad is powered by the Civic 2.4 unit available in North America.

Ariel’s founder Simon Saunders comments: “Switching to Honda engines is one of the best decisions that we’ve ever made. It’s a brand that can’t be matched for performance and bulletproof reliability and we’re delighted that this success is set to continue well into the future.”

The Honda jazz has been awarded the “Marcus 2016” for the Safest Small Car by Austrian Car drivers association ÖAMTC. The car is assessed by an expert jury on 30 safety criteria with a focus on safety features included on the base grade of a model. The Jazz is the only car from a Japanese manufacturer to win in 2016.

Travellers through Tokyo’s Narita International Airport will be greeted by ASIMO, Honda’s bipedal humanoid robot, from the end of March to early April. This will be the first time an event of this kind has been held at any airport in Japan prior to immigration checks and formal entry to the country.

ASIMO will demonstrate multiple actions such as dancing and kicking a football , as well as introduce various services available at the Narita International Airport for travellers. Honda’s personal mobility device, the UNI-CUB β will be used by hosts to escort travellers to the demonstration area.

Honda Vietnam celebrated their 20th year in operation this month as a manufacturer and distributor of automobiles and motorcycles in Vietnam. The occasion was marked with a ceremony in Hanoi which marked an important milestone for Honda Vietnam’s business activities and long term commitment to sales growth in Vietnam.

To celebrate the important milestone, at the ceremony, Honda Vietnam handed over 243 Honda motorcycles to the Vietnamese Police authorities for use in their daily operations. Meanwhile, Honda Vietnam received a Certificate of Merit from the National Traffic Safety Committee (NTSC) for its continued dedication to ensuring road safety, as well as a Government Award Flag signed by Deputy Prime Minister Nguyen Xuan Phuc on behalf of Prime Minister Nguyen Tan Dung for the company’s excellence.

Honda and Hitachi have successfully developed a prototype of a portable alcohol detector capable of distinguishing human breath from alternative gases and can be integrated into a vehicle’s smart key. The two companies also developed a system that can show the alcohol level measured by the detector on a vehicle’s display panel. The system can activate an ignition interlock to stop a vehicle from starting when it detects that the driver is under the influence of alcohol. Unlike other ignition interlocks, this device can be used anywhere prior to entering the vehicle, therefore reducing the temptation to drive.

Hitachi and Honda are aiming to commercialise the technology through effectively collecting data from future validation tests.

Following its Global debut at Geneva Motor Show, The Civic Hatchback Prototype made its North American debut at the New York International Auto Show. The prototype precedes the return of Honda’s compact hatchback to the North American market.

To read more on the Civic Hatchback click here. 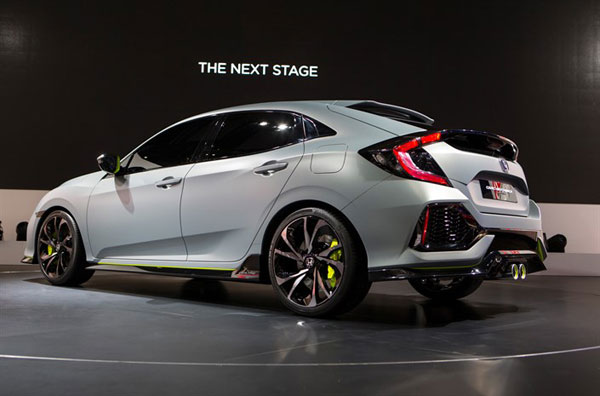 Honda also debuted the 2016 Civic Coupe Racing livery which will compete in the 2016 Red Bull Global Rallycross series. Driving the car for Team Honda are experienced competitors and former teammates Sebastian Eriksson from Sweden and Joni Wiman from Finland.

For the full story on the Red Bull Global Rallycross series, click here.

Also announced at the show were the headline acts for the Honda Civic tour. Multi-platinum selling music artists, Demi Lovato and Nick Jonas will be touring the US this summer as part of the 15th anniversary of the tour. Continuing in Honda Civic Tour tradition and starting today through February 2017, fans in the US will be able to enter to win a brand new 2016 Honda Civic Sedan designed and autographed by Demi Lovato or, a Honda Grom motorcycle customized and autographed by Nick Jonas.

For more information on the Civic Tour, click here.

Thrillist, JackThreads and Honda have collaborated on an exclusive limited edition HT3 Driving Shoe (MSRP: $100) that goes on sale today, available exclusively on JackThreads.com. The trainer is inspired by the all-new 2016 Honda Civic, and pays tribute to the three core aspects of Honda design that influenced its sporty and dynamic styling – high touch, high tension and high tech. The smooth lines of the Civic exterior inspired the clean lines of the shoe. To cover the laces, JackThreads developed a suede shroud that fastens into place, and when uncovered, reveals the Civic logo.