Safety, Environment and Comfort Benefits of Honda’s Approach to Intelligent Transport Systems (ITS).

Honda Motor Co., Ltd. will participate in the World ITS Congress from 22nd to 26th October 2012, with a demonstration of how its vehicles can communicate both with each other and with road-side infrastructure to benefit road safety, the environment, driver comfort and convenience.

At the 19th World ITS Congress in Vienna, visitors will find the latest information on Honda’s ITS activities in Europe, Japan and the United States. Congress participants can also experience for themselves Honda’s ITS equipped

Insight and an ITS Honda motorcycle (NC700X) by participating in the joint Car2Car and Testfeld Telematic Consortium demonstration around Vienna.

The Honda stand will showcase technologies and vehicles covering 3 thematic uses: safety ITS, green ITS and comfort ITS.

Safety
· Honda’s safety area will cover vehicle-2-X communication for cars and motorcycles – the way vehicles communicate with each other as well as with road-side ITS Stations, which provide traffic information, such as hazards in the road or traffic light timing.

· Simulations of safety applications based on the European DRIVE C2X project, can be experienced on the Honda cooperative car simulator and motorcycle simulator.
· The Honda stand also features a research project of an innovative electronic rear view system for motorcycles, augmented with advanced sensing technologies.

· Honda’s Co-generation unit and Honda Smart Home System for the house will also be explained – this system connects sustainable electric or hydrogen fuel cell vehicles with sustainable houses, to make for a more sustainable society.

Comfort
· In the comfort area, you can discover the Honda Internavi LINC and HondaLink for real-time traffic updates and ‘infotainment’ linked to a smart phone app in cars.

Outside the congress, participants will be able to sign up to a driving tour to experience the benefits of ITS applications in traffic around Vienna. A Honda Insight will travel in a multi brand convoy where the cars can communicate their location and driving dynamics not only to each other but also to road-side ITS stations, allowing them to receive in-vehicle notifications, such as ‘green light optimal speed’ and warning alerts, including:
· Broken-down vehicle ahead
· Road works ahead
· Hazardous location
· Traffic jam ahead
· Bad weather warning

The final safety application demonstration will show a warning when vehicles ahead put on their emergency brakes and a ‘motorcycle approaching’ indicator, which warns both the car driver and the motorcyclist (on an ITS enabled Honda NC700X) that there is an obscured vehicle potentially approaching across their direction of travel.

As the world’s largest motorcycle manufacturer, Honda will showcase its pioneering motorcycle safety technology and motorcycle connectivity. Honda joined the Car2Car Communication Consortium in Europe in 2005, working in particular on the integration of the motorcycle into the future of connected vehicles. In 1999, Honda was the first automotive company to bring connectivity to both cars and motorcycles (with the ASV2, Advanced Safety Vehicle research project) to enhance both rider and driver safety. In 2008, Honda led the first demonstration in Europe of the motorcycle application on a Honda GL1800

Gold Wing, within the Car2Car Communication Consortium. At this year’s demonstration, Honda has further developed the motorcycle warning system, called the ‘Human-Machine-Interface’, to enable it to function on more compact motorcycles, such as the NC700X.

The ‘Motorcycle Approaching Indication’ (abbreviated as MAI) is a safety application, which Honda has worked on as part of the joint Car2Car demonstration. According to the European motorcycle accident in-depth study ‘MAIDS’, the majority of accidents involving motorcyclists are caused by the other vehicle not properly seeing the oncoming motorcycle. The motorcycle-to-car connectivity system provides timely warnings to the drivers of both vehicles. The standardized data exchange message, which is sent between the networked vehicles, contains an identifier for motorcycles, so that the receiving vehicles are able to identify the oncoming vehicle as a ‘motorcycle’ and they can then take the necessary precautions. The most common accident configuration of intersection accident with vehicles on perpendicular paths (at T-junctions) was first demonstrated in 2008. The second most common configuration of left turn accidents was demonstrated at Odaiba area in Tokyo, Japan in 2010, whereby a vehicle turns left and cuts across the path of an oncoming motorcycle. A third accident configuration with vehicles coming from opposing directions is being demonstrated at this year’s joint Car2Car and TT Consortium Cooperative Mobility demonstration in Vienna. 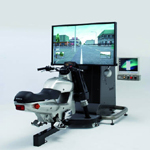 Honda’s Approach to ITS

Honda is a signatory of a Memorandum of Understanding with other vehicle manufacturers committed to making ITS technology a reality in the near future. Co-operative projects in which Honda participates in Europe, Japan and in the USA have already demonstrated the potential in ITS for linking people, mobility and the traffic environment to enable safer driving, with less congestion for a more comfortable mobile society. And of course, Honda is fully committed to bringing these systems to the motorcycle and making it available to the motorcycle riding community. The connected motorcycle heralds a revolution in motorcycling – and Honda is proud to be leading the charge.