· Ford remained the No. 2 best-selling vehicle brand in Europe for both September and the year-to-date in Ford’s 19 traditional European markets, despite heavy competitive discounting
· Ford’s September market share in Europe was 8.7 per cent, down 0.3 percentage points from September 2011. Year-to-date share is 8.0 per cent, down 0.4 percentage points
· Ford sales in the UK up 7 per cent in September and two per cent year-to-date, extending Ford’s market leadership
· In Russia, sales were up 2.4 per cent in September and 16.5 per cent year-to-date, making it the third largest sales market for Ford behind the UK and Germany
· Strong sales momentum for the 1.0-litre EcoBoost: More than 30 per cent of Focus customers currently opting for the International Engine of the Year
· Ford is launching an uninterrupted flow of new technologies and models in the remainder of 2012, including Focus ST, B-MAX, Transit Custom and Tourneo Custom, C-MAX and Grand C-MAX 1.0-litre EcoBoost, Kuga, and the new Fiesta

Strong sales for Ford in the UK and in Russia in September helped to stabilise Ford’s sales despite the continuing market weakness in many of Ford’s traditional Western European markets.

In its traditional 19 European markets (excluding Russia), Ford remained the No. 2 best-selling vehicle brand for both September and year-to-date, although sales were down in an industry that was at its lowest level since 1998.

“We are pleased with our strong performance in key markets such as the UK and in the Russian growth market which helped to stabilise our sales in what continues to be a very difficult European market environment”, said Roelant de Waard, vice president, Marketing, Sales and Service, Ford of Europe.

“Our share decline is not come as a surprise given we decided to continue to stay out of unsustainable short-cycle business as much as we can. We expect to benefit from an unprecedented rollout of new cars, sports utility vehicles and commercial vehicles with award winning technologies as we move forward.”

One-in-three Focus customers is currently opting for the 1.0-litre EcoBoost engine, the International Engine of the Year, which is a great result – especially as we introduce the engine on more models, including the B-MAX and C-MAX.”

In the first nine months of this year, Ford’s total vehicle sales in the UK were 276,500, an increase of two per cent and again outpacing the market. The UK was again Ford’s largest European market by volume and clear market leader, with a a Ford market share of 15.0 per cent.

Ford sales in Russia and Eastern Europe* were also up year-to-date through September. In Russia, Ford sales grew 16.5 per cent to 95,900, up 13,600 units – the highest volume gain for any market for Ford in Europe in the nine months of the year, while share increased by 0.1 percentage points to 4.3 per cent. In Eastern Europe, Ford’s sales rose by 5.5 per cent to 36,400 units year-to-date. 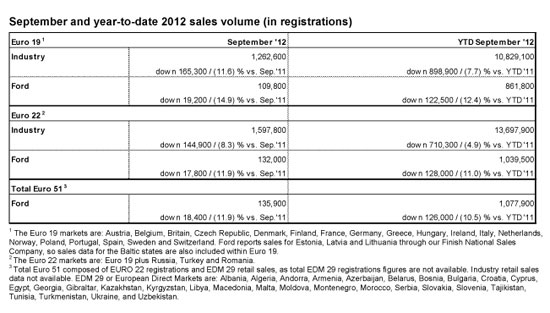 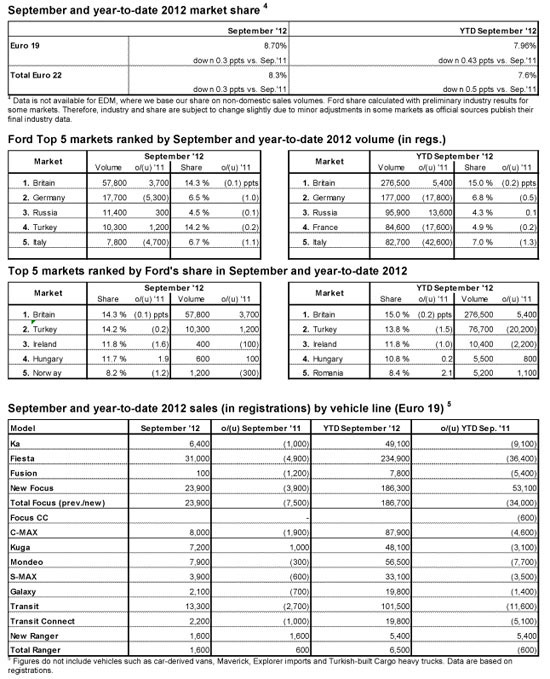 *Notes to Editors:
Ford of Europe’s market share refers to the 19 European markets (Euro 19) – excluding Russia, Turkey and Romania (as the other main markets) and excluding the 29 European Direct Markets (EDM), where we base our share on non-domestic sales volume and hence no total industry share figures are available. Sales data (reference: registrations) for specific car lines refer to Euro 19.

We also report our sales performance (passenger cars and commercial vehicles) for the total region for which Ford of Europe is responsible (51 markets in total), here however as retail sales (as total industry registrations numbers are not available).