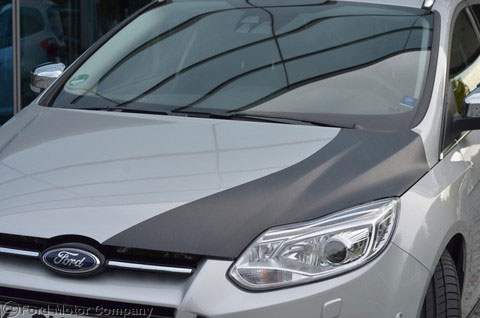 The prototype bonnet weighs more than 50 percent less than a standard steel version. As a result of progress made during an on-going research project involving engineers from the Ford European Research Centre, production time for an individual carbon fibre bonnet is fast enough to be employed on a production line – a significant step towards increased usage of lightweight materials in Ford vehicles.

“It’s no secret that reducing a vehicle’s weight can deliver major benefits for fuel consumption, but a process for fast and affordable production of carbon fibre automotive parts in large numbers has never been available,” said Inga Wehmeyer, advanced materials and processes research engineer, Ford European Research Centre. “By partnering with materials experts through the Hightech.NRW research project, Ford is working to develop a solution that supports cost efficient manufacturing of carbon fibre components.”

Dow Automotive Systems and Ford will focus on establishing an economical source of automotive-grade carbon fibre, as well as high-volume manufacturing methods: both critical to increasing the range of future Ford battery electric vehicles and plug-in hybrid electric vehicles.

Carbon fibre offers a very high strength-to-weight ratio. It is up to five times as strong as steel, twice as stiff, and one-third the weight. Advanced materials such as carbon fibre are key to Ford’s plans to reduce the weight of its cars by up to 340kg by the end of the decade.

“There are two ways to reduce energy use in vehicles: improving the conversion efficiency of fuels to motion and reducing the amount of work that powertrains need to do,” said Paul Mascarenas, Ford chief technical officer and vice president, Research and Innovation. “Ford is tackling the conversion problem primarily through downsizing engines with EcoBoost and electrification while mass reduction and improved aerodynamics are keys to reducing the workload.”

Ford has partnered with specialists from the Institute of Automotive Engineering at RWTH Aachen University, Henkel, Evonik, IKV (Institute of Plastics Processing), Composite Impulse and Toho Tenax for the course of the Hightech.NRW research project.

Funded by the German state of North Rhine-Westphalia, the project began in 2010 and, despite being set to continue until September 2013, has already made significant progress towards its targets of:
· Developing a cost effective method to manufacture carbon fibre composites for body panel applications that can be incorporated into existing vehicle production processes
· Significantly reducing individual component production times
· Reducing the amount of finishing work required to acceptable standards
· Meeting requirements for painting
· At least 50 percent reduction in component weight

Initial testing suggests that CFRP components such as the prototype Ford Focus bonnet will meet Ford’s high standards for stiffness, dent resistance and crash performance. The component has also performed well in pedestrian protection head-impact tests, thanks to its innovative construction of a special foam core sandwiched between two layers of CFRP.

“Customers of Ford’s multi-million selling passenger cars should not expect to see carbon fibre-bodied examples on sale in the near future," said Inga Wehmeyer. “But the techniques we have refined and developed for the prototype Focus bonnet could be transferred to higher volume applications at a later date.”