• Consumer events to drive Ford’s fuel-efficient EcoBoost line-up, including the all-new Fiesta ST, Escape and Fusion against the competitors in closed track experiences
• Consumers interested in attending can sign up at fordecoboostchallengedrive.com 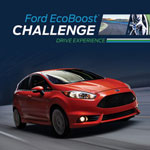 • By the end of 2013, more than 90 percent of Ford’s North American lineup will be available with an EcoBoost engine

Ford is taking the competition head on, inviting customers across the country to put the automaker’s popular fuel efficient EcoBoost powered vehicles to the test against its competitors while also getting the opportunity to drive the highly anticipated Fiesta ST.

The Ford EcoBoost Challenge will allow customers to drive the Ford Fusion and Escape head-to-head against the competition while experiencing how EcoBoost technology delivers unparalleled fuel economy and power. Participants will also have a chance to drive the all-new Fiesta ST, before it is available in dealerships. The tour, beginning in June, will head to 13 markets nationally.

“Ford is delivering on its promise to give fuel-efficiency-minded customers the power of choice, by offering a lineup that includes five electrified vehicles, two plug-in hybrids and eight vehicles available with EcoBoost Technology,” said David Mondragon, general marketing manager for Ford and Lincoln. “Throughout this tour, we will let consumers experience the technology that helps deliver better fuel economy and engaging driving than the competition.”

The EcoBoost Challenge events will take place on Saturdays in June, July, August and September in each market. Events will include an ST Performance Academy, a hyper-mile challenge for Ford hybrid vehicles and head-to-head competitive drives on an EcoBoost challenge course.

Pre-registration is live at fordecoboostchallengedrive.com. Space is limited and available on first-come, first-served basis.

By the end of 2013, more than 90 percent of Ford’s North American lineup will be available with an EcoBoost engine.