• AUTOBEST, in cooperation with the Spanish online media coches.net, and the Circuit de Barcelona-Catalunya, had tested 10 EVs on sale in Europe to check the real range. Professional journalists drove the cars in the surroundings of Barcelona city.
• Most of the tested models achieved the homologated range under the new WLTP legislation showing how close to the real life the new protocol is.
• The Tesla models are the EVs with the longest real range on the market

Barcelona – AUTOBEST, the largest European motoring jury and the leading Spanish online motor media, coches.net, in cooperation with the Barcelona-Catalunya Circuit, organised the first Independent European Real Range Test for Electric Vehicles. The professional motoring journalists of AUTOBEST drove ten electric vehicles (EVs) available in Europe (all with more than 200 kilometres of homologated WLTP range) to answer the critical question that people considering the purchase of an EV have: Which is the range I can expect in a real use if I buy an electric car? 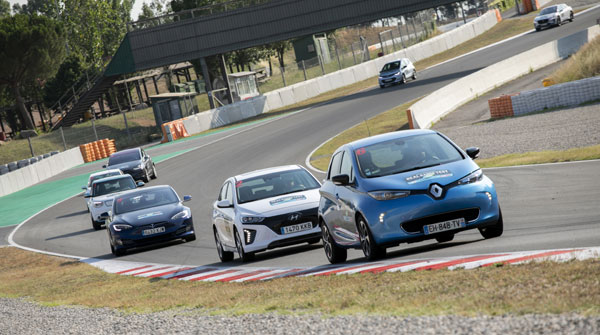 “The most important result of this comparative test is about the real range of more than 200 km for all the ten cars sold in Europe nowadays. This distance is far beyond any daily commuting in Europe, making any of these cars suitable for everyday drive. It is a crucial achievement of the car industry, signalling the end of the range anxiety”, said Dan Vardie, Founder & Chairman of AUTOBEST. “More, no less than 4 cars exceeded 300 km real range –the two Tesla, Model S and Model X, Opel Ampera-e and Jaguar I –Pace- a remarkable real autonomy able to offer great electromobility. This is already a great achievement of EVs. We are convinced this will be the norm from now on. For the next year comparative EV test we are expecting a larger number of EVs delivering +300km and more real range!” Vardie added.

Joan Dalmau, coches.net Editor and Spanish AUTOBEST Jury member added: “We were surprised by some cars that achieved and even overtook the WLTP range figures. The real range obtained in this test, the evolution of the charging stations and the charging speed in the fast chargers turn the EV to a valid alternative both in the urban environment and even for motorway use”.

Some of the tested models as the Hyundai Ioniq, the BMW i3, the Kia Soul EV, the Volkswagen e-Golf or the Opel Ampera-e achieved or even exceeded their homologated WLTP figure. Other models, such as the Renault Zoe or the Model S and Model X Tesla cars went beyond the 90% of its confirmed WLTP range leaving Nissan Leaf and the new Jaguar i-Pace to rank lower in the `AUTOBEST Index 1` from the homologated figures.

With this event, AUTOBEST is introducing two new indexes dedicated to EVs. The ‘AUTOBEST EV Index 1’ represents the percentage of real range versus WLTP homologated range. The second, ‘AUTOBEST EV Index 2’ focuses on the efficiency of the battery, indicating the real range for every kWh of the battery. “These are the first two indexes proposed by AUTOBEST to give a new perspective on the performance of electric cars. We will come later with other ones, more innovative, non-linear assessment, to make comparisons between cars in different segments. It is in line with our AUTOBEST Credo strategy released in February last year during the AUTOBEST Gala in Lisbon, Portugal,” stated Dan Vardie.

The Kia Soul, Volkswagen e-Golf and Hyundai Ioniq are the top three performers of AUTOBEST EV Index 1, with all of them exceeding the ‘official’ suggested range, a great result for a consumer type test. For the ‘AUTOBEST EV Index 2’, the best three cars were the BMW i3, Hyundai Ioniq and Renault Zoe. All the results and AUTOBEST indexes are in the tables included.

Real Range Test conclusions:
– The Tesla cars (Model S and Model X) are the EVs on sale with a more extended range (+400 km for both models). The models used in this test were 100 versions with a 100 kW/h capacity battery. Both models are also available with a 75 kW/h battery (75 version).
– Half of the cars achieved the homologated WLTP figure which shows this protocol is closer to reality compared with previous NEDC cycle. WLTP is mandatory for all passenger cars sold in Europe from 1 September 2018.
– The Jaguar i-Pace and the Nissan Leaf are the models which real range result was less from the homologated WLTP range. The Jaguar was the only non-production car in the test. The available unit was a car coming from the European Press Launch, a prototype level build and running with a prototype level of software, without the last software evolution.
– The Hyundai Ioniq and the Volkswagen e-Golf are the electric cars with more than 200 KM range consuming the less, with little more than 12 kW/h.
– The environmental conditions, driving style, vehicle charge, the use of some equipment as the climate system and traffic conditions are critical factors in the range measurement. What we consider is that is could be possible to achieve better results using the eco mode of some cars, driving carefully and not using the climate system, but the goal of this test was to reproduce the usual traffic conditions in the surroundings of a big city faithfully and to use real-life situations of the average owner.

Dan Vardie, Chairman of Autobest Jury, explains: “This was not a performance or a handling test and not even a maximum range test. Our goal was to check the real range of all those models to know how far it was from the announced WLTP figures (and having a reference to old NEDC), and to show the potential users of these vehicles what real range they can expect if they buy an electric car. However, AUTOBEST is not claiming that the released figures are the ‘real-life’ range for the average customer of Europe, coming from a scientific approach. The figures for this test are for reference only, are authentic and represent the reality of our performed test in Barcelona surroundings. Under our ECOBEST Challenge project umbrella, we are also working to improve the test for next year in a more scientific way.”

The participating AUTOBEST Jury members’ comments on the test and how each car behaved at the end of the range are included in the second annex.

The test started and finished at Barcelona-Catalunya Circuit where the cars were also recharged. All the vehicles used were production models (except the Jaguar, a pre-production unit with a prototype level build and running with a prototype level of software), tested with one person onboard, the climate system on and the tyre pressure set to the recommended pressure by the respective brand.

All the vehicles travelled the same 180km journey mixing motorway, conventional roads and urban streets. The cars with an extended homologated range followed a new journey with similar characteristics. All the vehicles were used in normal mode (without Eco or Sport mode), and all were fitted with a measuring device from Blunik. This piece of hardware is used in regularity rallies and known for its precision in measuring distances.

All the drivers exchanged cars at 30- 40 km to avoid the effect of the driving style in the final results. All the vehicles drove in convoy behind a lead car which indicated the correct route and established the average speed.

AUTOBEST and coches.net performed the test twice to obtain two different measurements and get an average real range. Two inspectors from Bureau Veritas observed the test regarding a possible official validation in future editions of this test the years to come.

All the cars entered the Barcelona-Catalunya GP Track with an amount of less than 50 km remaining range and ran at 70 km/h average speed until the cars indicators announced a 0% battery level. Then, the cars were still run in the paddock until they stopped completely.