Emad Tahtouh, Director of Applied Technology at FINCH, has been announced as a speaker at the London International Awards 2015 Creative LIAisons program.

Tahtouh’s addition strengthens what is already a stellar lineup of speakers. He joins the bill alongside John Mescall, Ralph van Dijk, Matt Eastwood, Pum Lefebure and Keynote Speaker Daymond John. Emad is set to speak to the more than 100 young creatives attending the fourth annual Creative LIAisons program. Creative LIAisons (formerly known as ‘Creative Conversations’) runs concurrently with the LIA judging in Las Vegas and is LIA’s way of giving back to the industry. This mentoring program is fully funded by LIA, encompassing travel, accommodations, rewarding speaker presentations, a peek into the statue deliberations and various networking opportunities with jurors and speakers in a relaxed social setting.

Tahtouh comments: "This will be my first time speaking at Creative LIAisons, so I don’t really know what to expect. The prospect of speaking to a room full of young, talented and motivated Creatives is intensely exciting. I don’t plan on making a run-of-the-mill presentation; I really dislike the format of standing up on stage and just showing reel after reel of my own work, and that’s not what this will be. I’m hoping to shake things up a bit. Talk about the current Creative model, what’s right with it, what’s wrong with it? What steps can we take to start making more innovative work? It will be more of a conversation and less of a presentation."

As Director of Applied Technology at FINCH, Tahtouh develops and curates technology solutions in both practical and creative capacities. The most renowned projects that he’s overseen during his time at FINCH are the development and creation of The Most Powerful Arm and 37 Degrees. 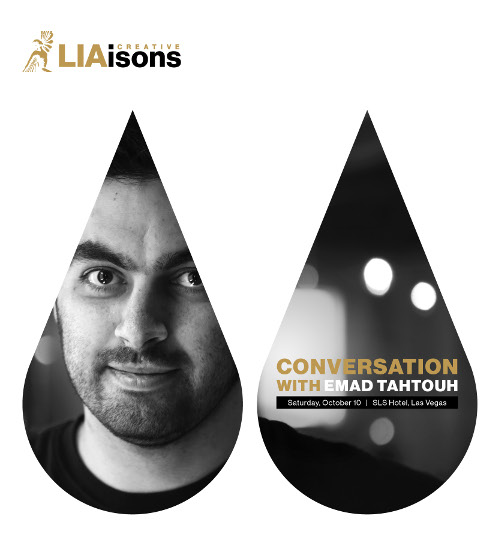 The Most Powerful Arm utilized a petition-signing robot with the aim of raising awareness of Duchenne Muscular Dystrophy and was the first piece of Innovation to win a coveted D&AD Black Pencil (as well as Digital Gold at 2013 Spikes Asia and Gold at the 2013 IAB MIXX Awards). 37 Degrees was the creation of a bifocal dual perspective system to allow viewers at home and in the cinema to choose which narrative they wanted to follow. The 37 Degrees innovation was part of Pedigree’s Adoption Drive and, amongst multiple other awards, won Gold at 2012 Cannes Lions.

During his time at FINCH, Tahtouh has judged at Cannes, Spikes and AWARD and has presented at Cannes, Spikes, SXSW and SAWA. This success is all fueled by his passion for the development and creation of great innovation. His team at FINCH has worked on many amazing projects including bringing a robot orchestra to life for Intel’s Intelligent Sounds campaign with award-winning recording artist, Flume. On top of this, Tahtouh has done great work for road safety campaigns including a project for the RAC, which saw him build an attention-powered car that slows when you’re not focused, as well as a recreation of the Great Ocean Road in Unity 3d that turned the scenic drive into a skills tester for the Transport Accident Commission.

The LIA 2015 Entry System is now accepting entries through August. Judging will take place from 1st October to 10th October. The shortlists will be announced as each judging session concludes, with winners being announced 10th November. For more information on submissions and eligibility please visit www.liaawards.com/enter/eligibility/