Ralph van Dijk, Founder and Creative Director of Eardrum, has been announced as a speaker at the London International Awards 2015 Creative LIAisons program.

Joining an already impressive line-up of industry speakers, including Matt Eastwood, Pum Lefebure and Keynote speaker Daymond John. Ralph will also act as the program’s Moderator, injecting his appreciation of powerful production and performance into bridging together this year’s eclectic line-up of speakers.

Ralph comments: “It’s always an honour to be invited to speak at Creative LIAisons. The program is one of our industry’s most generous initiatives and if you’re an ambitious creative, it’s like getting a backstage pass to the ultimate advertising gig. 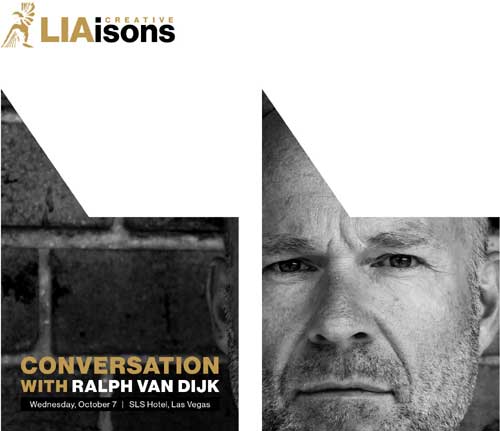 “I’m looking forward to challenging a few preconceptions surrounding radio and audio. People today are connected to so many exciting new platforms – usually through their headphones – so it’s high time we explored all the opportunities as we enter this new golden age of audio. Knowing how to write for the spoken word, cast great actors and direct authentic performances are skills every creative should at least appreciate. I’ll hopefully be able to pass on a few tips as well as engender a healthy disrespect for the way agencies currently approach sound. As for the rest of the week, those lucky enough to be selected will get up close and personal to the biggest names in the business, find out how they got where they are today and discover what makes them tick.

“Sitting in on the judging is also an invaluable experience. Creatives will learn to appraise their own ideas more effectively and understand what judges look for. Oh yeah, and it all takes place in Vegas. It doesn’t get any better”.

Ralph is a world authority on radio advertising. He started his career as an agency writer in 1987, winning a Clio Award for one of his first radio ads. He got the hint and has specialised in radio ever since. He co-founded Eardrum in London in 1990, and has since launched a new office in Australia. Eardrum is now the most awarded radio and audio agency in the world, producing innovative radio campaigns, imaging and branded content for advertisers, agencies and radio networks around the world.

His passion for the medium is fueled by a determination to innovate, subvert and explore new ways for brands to connect to their audience through sound. In the last 4 years alone, Eardrum has won 15 major international awards, including three Gold Lions, One Show Grand Prix, New York Festival Gold, and was named Radio & Audio Agency of the Year at the 2013 and 2014 London International Awards.

Ralph is set to speak to the more than 100 young creatives attending the fourth annual Creative LIAisons program. Creative LIAisons (formerly known as ‘Creative Conversations’) runs concurrently with the LIA judging in Las Vegas and is LIA’s way of giving back to the industry. This mentoring program is fully funded by LIA, encompassing travel, accommodations, rewarding speaker presentations, a peek into the statue deliberations and various networking opportunities with jurors and speakers in a relaxed social setting.