· Saturday 19th December at 9.23am set to be the most dangerous time on the road over the festive period, with the highest number taking to the road potentially over the drink drive limit after their Christmas party
· More than a quarter will get behind the wheel before 10am
· More than two-thirds will pre-load with alcohol and a quarter will have more than six alcoholic drinks at their Christmas party

Almost one in three Brits (29.25%) have admitted to driving the morning after when they believed they may still be over the drink drive limit from the night before, according to alarming new study out today. 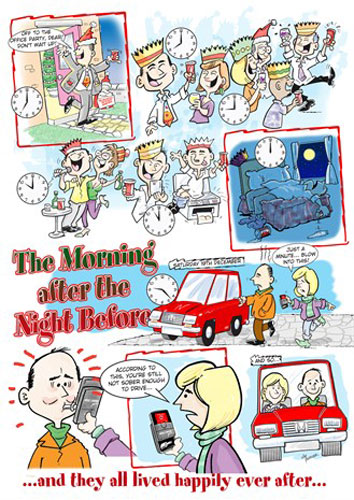 The research, commissioned by Honda (UK) and AlcoSense Personal Breathalysers, investigated attitudes towards drinking and driving over the festive period discovering that one in four (27.7%) Christmas party-goers predict that they will have six or more alcoholic drinks – with half of this group planning on knocking back eight or more – putting them at real risk of being over the limit the following day.

It also found almost two thirds (62.75%) intend to ‘pre-load’ with one or more drinks before arriving at the party.

With such a big night planned by so many, perhaps unsurprisingly more than a third (38.35%) believe they could be over the drink-drive limit the morning after their Christmas party, yet more than one in four people (26.25%) aim to drive before 10am the following day.

Furthermore, despite being the most aware of the morning after drink drive risk (44.88%), the 25-34 year old age group are most likely to get behind the wheel before 9am the following morning.

Worryingly, more than one in five (21.03%) admitting that they would do so, even if they suspected they were over the drink drive limit.

The research was commissioned by Honda (UK) and AlcoSense Personal Breathalysers to mark the launch of a new and unique partnership between the two brands. The partnership aims to raise awareness of the dangers of driving the morning after drinking to ensure safer UK roads this Christmas and beyond, with AlcoSense Personal Breathalysers being given away free of charge in Honda’s UK dealerships throughout the festive period.

Philip Crossman, Managing Director of Honda (UK) comments: “Christmas is all about having fun and while the vast majority of party-goers won’t risk it the morning after, a small percentage will. And that’s enough to make a difference. We simply want people to be safe on the roads this Christmas as many just don’t consider the effects of alcohol still in their system the morning after; our partnership with AlcoSense Personal Breathalysers sets out to raise awareness of the risk and make people think twice before getting behind the wheel, especially after their Christmas party.”

Hunter Abbott, Managing Director of AlcoSense Personal Breathalysers comments: “For the majority of people four pints or four large glasses of wine could be enough to still have alcohol in your system the morning after the night before. These statistics show there’s still a long way to go with awareness about the risks of morning after drink driving and hopefully the partnership between Honda and AlcoSense will help bridge that gap. To claim your free AlcoSense breathalyser, just go to your local Honda dealership and ask for one – it’s that simple. All we ask in return is that you use it the morning after your next big night.”