Inspired by the positive reception across Europe to the Civic Tourer ‘Active Life Concept’ at 2015, Frankfurt Motor Show Honda is set to launch new bicycle transport system. The new system is an innovative ‘In-car Bicycle Rack’, which enables the transport of up to two full-size bicycles within the load bay, and improves security, safety and fuel efficiency compared to a roof- or rear-mounted rack. 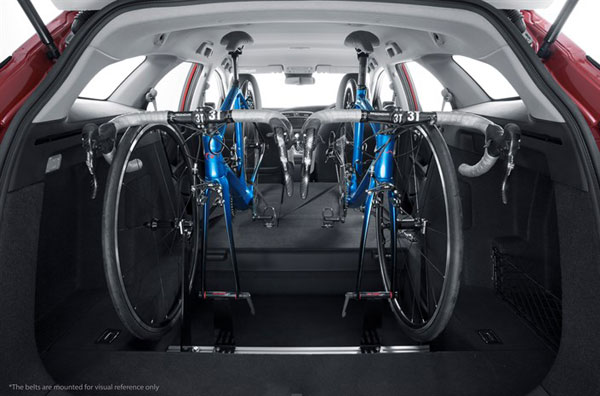 In the months following Frankfurt, then president of Honda Motor Europe, Toshiaki Mikoshiba challenged Honda’s R&D and accessories teams to make the concept a reality. The system is designed for riders of racing bicycles in particular, presenting a convenient storage solution for the frame and demounted front wheel, giving owners added security and protection against the weather. The in-car design also ensures Civic Tourer retains the exceptional fuel economy that helped the car secure a GUINNESS WORLD RECORDS™ title last year*.

The in-car bicycle rack makes full use of the Civic Tourer’s class-leading load space and unique centre fuel tank layout. An aluminium rail is mounted in the deep boot well. Sliding brackets are attached to the rail, which feature a T-bar for the bicycle’s front fork to slot onto. The rear wheel rests on the back of the folded-down rear seat, while tall uprights at each edge of the rail have a slot to secure the front wheel hub. A fixing belt secures the bicycle frame using the existing integrated load bay lashing rings. 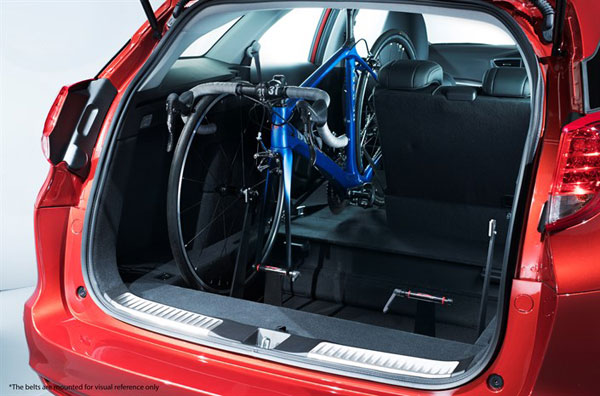 This flexible system means that different combinations of passengers and bicycles can be accommodated. A driver and passenger can sit up front with two full-size bicycles securely mounted behind them; alternatively, just 40% of the rear bench seat can be folded down, mounting one bicycle in the load bay, and allowing space in the back seats for an additional passenger, plus luggage.

The In-Car Bicycle Rack can be combined with existing Honda accessories, such as the boot lip protector, boot side net and roof cross bars, to make an even more versatile car that suits an active lifestyle.

The unique bicycle rack will have its public debut at the 99th Giro d’Italia, for which Honda is the official sponsor and supplier of support cars. Riders on the event complete a gruelling 3,383-kilometre race course that finishes in Turin on 29 May.

Honda’s innovative In-Car Bicycle Rack will be available through selected dealers from October 2016.