It seems that nowhere is safe from Monster Bill. The money-gobbling creature is back – this time terrorising people from their bathtub. Luckily, moustachioed singing icon Gio Compario is on hand to save the day. 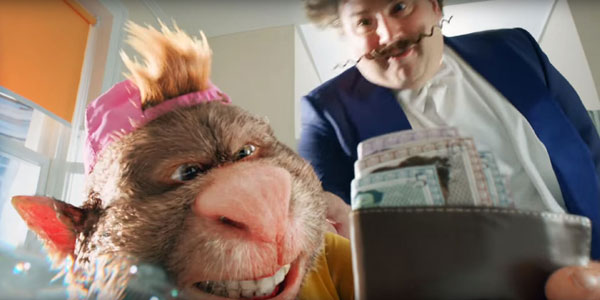 In ‘Bathroom Bill’, the couple are being ‘driven bananas’ by the bathroom intruder. As the music and tension escalate, Monster Bill grows fatter and fatter gorging on the couple’s money. The menace finally meets his match when Gio salvages the situation using GoCompare’s free and totally unbiased comparison services.

The spot, created by GoCompare with creative duo Chris and Siân Wilkins, builds on Yellow Boat Music’s partnership with the comparison site. The music production experts have delivered a bespoke soundtrack for each of GoCompare’s iconic TV campaigns. This latest instalment includes a custom piece composed and arranged by Paul Cartledge and Philip Jewson, who saw the project through from the onset of the production process right through to completion.

‘Bathroom Bill’ called for the team to compose a fresh underscore and arrangement of the new salsa-inspired ending to underpin Wynne Evans’ vocals.

‘Bathroom Bill’ is available to view online at; https://www.gocompare.com/tv-advert/