• Honda’s hot hatch up for award for most eagerly anticipated car launch of 2017
• Reader award nomination good indicator of successful launch
• Made in Swindon, the new Civic Type R is British built and exported world wide

The British-built Honda Civic Type R has been shortlisted for the coveted What Car? reader award and is among the most eagerly anticipated car launches of 2017. 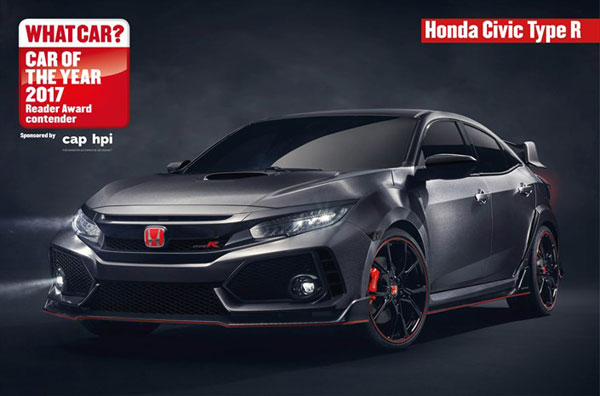 Made in Swindon and expected in showrooms in the latter half of 2017, the next generation Civic Type R comes hot on the heels of the current car, which was launched in summer 2015. Debuted as a prototype at the Paris Motor Show back in September, the mass production version is expected to be unveiled at the Geneva Motor Show in March next year.

With over 10,000 readers expected to vote on a list of 2017 car launches compiled by the experts at What Car?, the competition is fierce as the award is a valuable indication of sentiment towards cars being brought to market in the next year.

To vote in the awards, head to www.wcreaderaward.com and click on the Civic Type R.

Philip Crossman, managing director of Honda UK, commented: “The next generation Civic Type R will be the fastest and most extreme version of the Civic to wear the famed red badge in Honda’s history. Kicking off the year with a win for this car at the most prestigious automotive award ceremony would be a fantastic achievement. We are incredibly keen to win this award and are asking all Honda fans, customers and lovers of the Type R to get voting!”