Slovenian Advertising Chamber organizes of one of the biggest European advertising festivals Golden Drum which will take place next week from 7-10 October 2014 in Portorož and Piran, Slovenia. 1220 entries from 24 countries of New Europe have entered the Golden Drum competition this year. Additionally young creatives have entered over 100 entries in three Off Drum Competition: Beat the Drum for Change 2014, Don’t Text & Drive Poland and Don’t Type & Drive Macedonia. 30 different networks submitted their entries in the Golden Drum competition, all competing for the grand prize: Golden Net Award. 35,1 percent of all entries (393 entries) were submitted by independent agencies, bringing the overall number of entrants to 291 this year. Of 24 countries who compete this year, Turkey showed the biggest growth in submitted entries as their agencies entered 41 entries more than last year, bringing the total number of entries from Turkey to 184. The two new groups T. Branded Content and W. Media collected 45 and 56 entries, which makes them an important development of the Golden Drum competition. 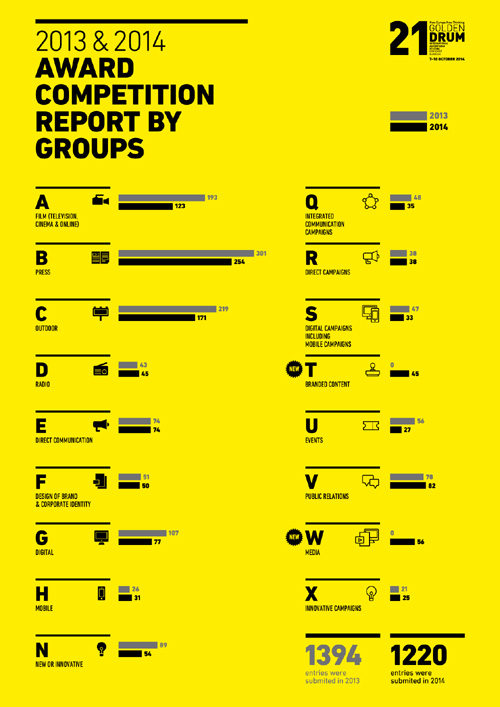 Each year around 800 delegates from 40 countries visits the festival and this year, they will get a chance to listen to over 30 different speakers. Golden Drum Festival Program will this year focus on “Creativity, Content and Happiness”. Delegates will get a chance to listen to a list of interesting speakers and lecturers such as Brazilian Art and Creative Directors: Roberto Vilhena, Chief Creative Director, Artplan Group, Rio de Janeiro; Eiji Kozaka, Art Director, WMcCann São Paulo, Ricardo Wolff, Global Creative Director, BBDO Berlin, and Pedro Rosa, Art Director, AlmapBBDO, São Paulo, who will present creative everyday life of Brazilian advertising agencies in the set of four lectures »A Day of Creative Life. Golden Drum will this year in partnership with Google and YouTube host two renowned speakers: Mailine Swildens, head of The Zoo, SEEMEA region for Google/YouTube, and Mike Glaser, Marketing Lead, Google Creative Partnerships, who will share their creative digital insights. Creativity will also be the main focus for David Sandstroem, CEO of DDB Stockholm, who will introduce Swedish creativity in Creative academy by DDB Stockholm, Sebastijan Hejnowski, CEO of MSL Group Polska, will talk about how public relations can get creative in the PR Academy by MSL Group while Dan Toma, Senior Innovation & Product Manager from Deutsche Telekom AG will share his Anti-Procrustean approach to corporate innovation. How to create happiness and change the understanding of people into business advantage will be the main topics in the lecture by John Kearon’, Chief Juicer and Founder of BrainJuicer Group PLC, UK, which provides consumer-driven insight to 16 of the world’s 30 largest buyers of market research and other marquee clients in FMCG, food and beverage, retail, financial services, electronics, health and beauty, and entertainment. Content creation and storytelling are the topics which advertising industry is spending a lot of time on, because they represent a huge opportunity for advertisers and agencies. Storytelling and content creation will also be the focus of the workshop »Storytelling« by Warwick Cairns, Consultant Strategist at The Effectiveness Partnership and successful author of number of books and articles on advertising and consumer culture. Whole Golden Drum Program and Speakers are presented on website www.goldendrum.com. 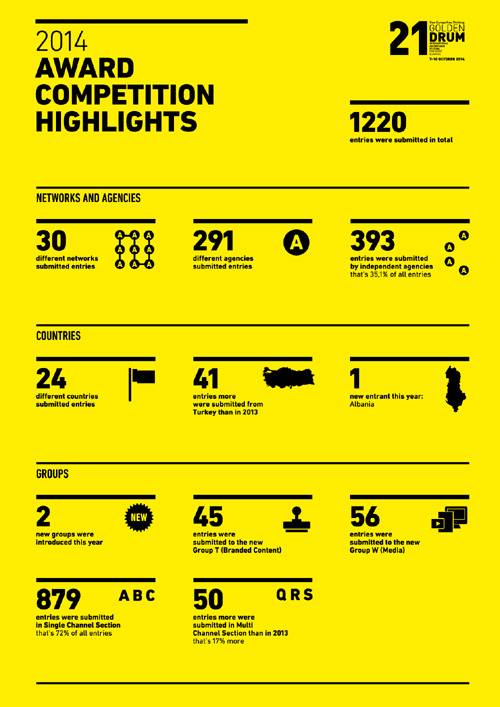 30 networks, 291 agencies from 24 countries have entered 1220 entries in the 21st Golden Drum Competition this year. 393 entries in this year’s competition were submitted by independent agencies which will make the race for Tartini Award one of the most exciting yet! The total number of entries is 12,5 percent lower than last year when 1395 entries were submitted, but Multi Channel section has received 17 percent more entries this year (50 entries more), which shows important development of creative communication campaigns and a strategic shift in agency work this year. The two new groups this year, T. Branded Content and W. Media, received 45 and 56 entries, making them in important development of the Golden Drum competition. Golden Drum competition welcomes Albania as the new country which has entered their works and an important and steady growth of entries from Turkey agencies which have entered 184 entries this year (last year 143, the year before that 77), shows great potential and a strong will to become the most successful entrant country at 21st Golden Drum.

All Golden Drum finalists have exclusive right to participate in the Intercontinental Advertising Cup Selection. Intercontinental advertising cup (ICAC or The CUP) is a global creative tour-de-force that is filtered no less than five times by the world’s most respected juries. Only ads that were entered in one of the four participating continental advertising shows are eligible to compete in the Intercontinental advertising selection. This is the first filter. Only finalists of Asia Pacific’s ADFEST, Ibero-American FIAP, Art Directors’ Club of Europe ADC*E and New European Golden Drum make the intercontinental creative selection. Gold awards winners enter the competition automatically and free of charge, while all other finalists need only to pay a small service fee. ICAC is a non-profit organization. Second filter. Members of all four continental juries select 5 nominees in 38 categories, thus making a super-selection of 190 most creative ideas from four continents. Third filter. In the next stage the jury chooses categories’ champions, which are the 38 CUP winners. Fourth filter. Finally after a long and particular process, the jury decides the winners’ winner; the most creative work of the four continental festivals and their selections; the recipient of THE GRAND CUP. To take part in the Golden Drum competition is a privilege that opens the exclusive gateway to the intercontinental selection, already awarded with the INTERCONTINENTAL CREATIVE SELECTION 2014 prize. 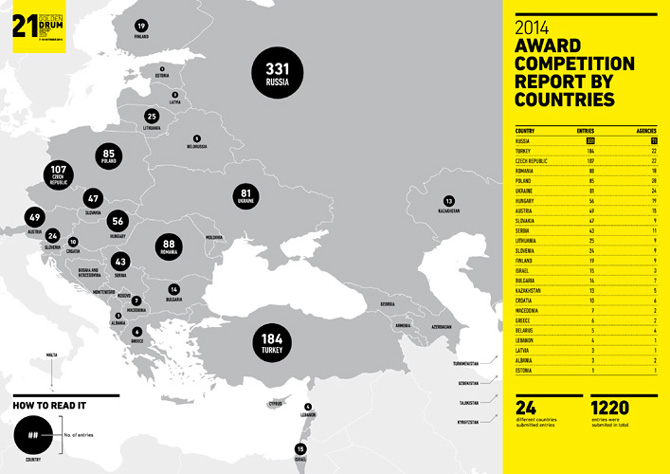 This year’s delegates will be invited to attend four parties and two award ceremonies: Golden Drummers Get Together Lounge Bar on Tuesday, 7 October where they will Chill & Relax with the rhythms of evergreens by DJ MAJ. On Wednesday, 8 October, Golden Drum Premiere Award Ceremony will reveal the first Silver Drum, Golden Drum and Grand Prix Awards in groups D. Radio, G. Digital, H. Mobil, N. New or innovative, S. Digital campaigns including Mobile campaigns, T. Branded content, R. Direct campaigns, U. Events and V. Public relations. Also the winners of the Beat the Drum for Change 2014 Off Drum competition will be announced that evening. After the ceremony Drummers will unwind at the Golden Drum Opening Party where DJ MAJ will take us Back to Basic’s. Hungarians set the mood on Thursday, 9 October, in Café Teater in Piran where they invite Drummers to the Irregular Hungarian Party organized by Carbon Group and HPS Group.

On Friday, 10 October, the Final Award Ceremony, which will be the last awards act of the Golden Drum Competition 2014, as the Silver Drum, Golden Drum and Grand Prix Awards in groups A. Film, B. Press, C. Outdoor, E. Direct communication, F. Design of Brand & Corporate Identity, X. Innovative campaigns, W. Media and Q. Integrated communication campaigns. The highlight of the evening are the grand winners of Golden Rose Award, Tartini Award, Golden Net Award, Brand Grand Prix Award and new this year Good Cause Grand Prix Award for the best Social & charity work, plus Golden Watch Award and Virtuoso Awards. After the ceremony the Golden Drum Closing Party will take place where Drummers will get invited to party with Dj Janush, followed by special Drummers VJ-ing.